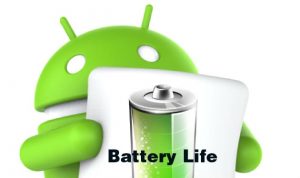 As an addendum to my old general guide on battery performance here, a few things are different in Android Marshmallow.

In general a few days after upgrade from Lollipop to Marshmallow, the battery stamina on my BlackBerry Priv seems to have been SIGNIFICANTLY improved due to Doze. The idea is to wake background apps more seldom when the phone is not actively used, like while you are sleeping.

A few things to note

On the running apps

Sure you can still under Settings, Apps, “All apps” open each one by one, and see if they are actually running and stop them as needed – this is quite cumbersome though.

BUT there are other -rather odd- ways to get to the info!!

The running services and (in)active apps

A few apps that I would like to stop in the background, can NOT be set to Inactive though – luckily(!) these does not seem to be resource hogs….

Setting an app to Inactive does NOT actually STOP it, it is more like setting it aside. If you reopen the app it will be exactly where you left it. (In contrast to a stop, where it would start from its main page on reopen).

The running apps by memory usage

This does (unfortunately) not offer a list of the actually running apps, but the ones that have been running within a given period, and the minimum selectable is the last 3 hours

Also there seems to be a minimum limit, so apps using ram below that are NOT included in the list – so a simple app will go under this memory-radar!

I do not know the limit, the lowest I have seen on the list (yet) is 27KB.

When you click on an item on the list, the details page has vertical ellipsis top right that gives you easy access to “Force Stop”. Or you can use the info-circle to get to the app-page known from the Apps-list. (See also section below on oddities) 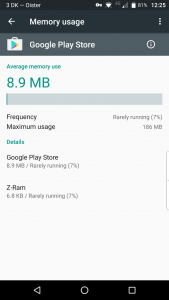 Note that forcing an app to stop, does NOT make it immediately disappear from this list, as it has still been in use within the last xx hours…

To add to the confusion “Force Stop” is available as a selectable option, even if the app IS already stopped (it is not greyed out), so I would recommend rather using the info-circle.

Unless the app is ill behaved, the more clean Inactivate would often do just as well as swinging the axe and killing the app by Stop. Especially there are no risks of nasty side-effects as by Stop, where something depending on a running process might get quite confused. So start by Inactivate, unless you really need the Stop.

…If apps requires a real Stop to behave, it is a hint that you should consider using alternative apps, or if bloatware, to deactivate (if allowed to).

And if you are not allowed to disable it, then try to go to section Permissions on the app, and remove the few ones that can be removed (only ten permission groups are removable: Camera, Contacts, Location, Microphone, SMS, Videos, Body sensors, Calendar, Phone, Storage) – but you could be lucky that this would maim the bloat so substantially that it will not restart itself after stop…

You might see a somewhat confusing message on attempting to change permissions: “Screen overlay detected”. It is not exactly intuitive to get around this. See a post on the issue here. 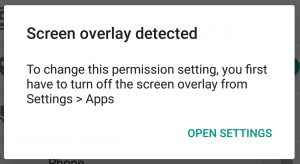 There seems to be something strange about the “memory used by app”. Have a look at these screenshots from the bottom of the list, with the selected period being the only difference. 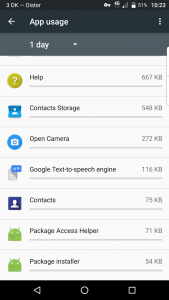 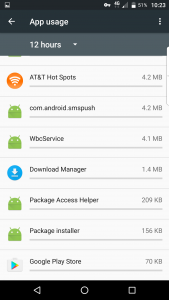 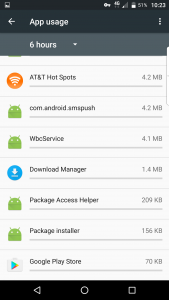 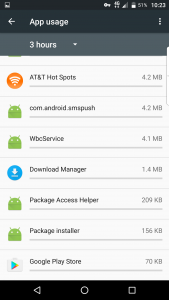 It can not be the total amount used, as for some the amount used the last 3 hours is more than the last day.
(And yes I have tried to revisit 1 day, it is NOT that it has been used between the screenshots were taken….)

And if it is the average use, then 12, 6 and 3 hours would be highly unlikely to show identical numbers.

So it must be something like “Average usage while active“. Though this sounds a bit odd at first, it does make sense to inform us what the app is ‘normally’ using, independent of whether the app is frequent or seldom active.

Entering Settings, Memory, info for both normal and system apps will be displayed,

Under Settings, Apps, All apps, you would need to press the ellipsis top right and “Show system” to include these.

As an example I see an entry for the “AT&T Hot Spots”. And clicking the info-circle almost top right, I get to the app. 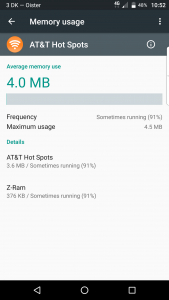 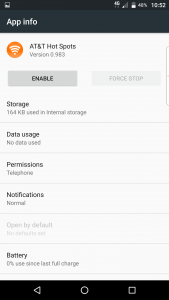 Note that you under Settings, Data Usage, at the Ellipses can select “Network Restrictions” and here claim that your WiFi is metered. This will make the “Restrict app background data” prevent an app from using the WiFi as well. This can be very handy to at the least partly maim the Bloat that can not be disabled…

The flip side of this claim is that you can get warnings on larger downloads.