It should give info about batteries, how the phone uses them, and (hopefully) with some good hints to how to get the most out of each battery (Life and Stamina). Many of the hints go for other hardware with Li-Ion batteries as well. Say Laptops, Toothbrushes…..

This thread is originated from SonyEricssons Xperia phones.

On problems with weird drops and raises: Try “Johan’s Trick” below once

● Once in a while drain battery deep to get calibration right

Note that the ‘remaining percentage’ you see is an ESTIMATE not a measurement! 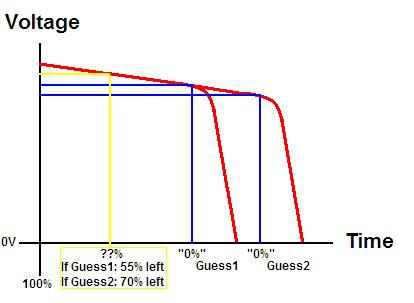 Links to other threads

On the battery stamina for the Xperias I made this thread

A guide in obtaining good battery stamina on your Xperia phone.

The thread is on what you can do to get the phone to last longer on each charge.

On the build in Battery Use app I made this thread

Pros and cons on “Battery use”-app.

This app is our entry point in knowing what is going on. The thread is on how this can be used, and some known ‘issues’, common misunderstandings and tricky parts about it.

The rest of this thread is intended to deal with the underlying parts.

The battery, how the OS uses it, charging and battery life-span (Life and Stamina are not the same for rechargeable batteries).

Let us start by looking at how a Li-Ion battery is discharging. 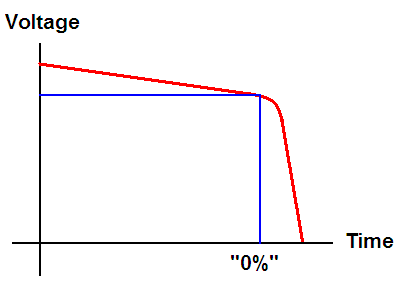 This is a rough sketch on how a Li-Ion battery drains with a fixed load.

Note that the voltage is rather constant until it drops off rapidly.

Estimating what is going on

The phone would (or at least should) turn it self off before reaching this point.

BUT nor this point nor the curve is fixed! It changes with several parameters. These includes:

So the system have to make a new ‘best guess‘ at where this blue line is at current conditions.

Here is a sketch trying to illustrate that:

The yellow line as the present readout. The system tries to make an estimate (educated guess) on where the “0%” will be based on the knowledge of the present state, the battery history, and the surroundings.

Think of a aeroplane and its ETA (=estimated time of arrival). The “0%” is similar.

So I’m in no way saying it is an easy task to find, I just want to point out that the phone does not always ‘guess’ correctly, and as it modifies its best estimate, Battery Use shows strange results of weird drops or rises, either smooth or as jumps, depending on how they do the adjustment.

This is not an indication af a hardware failure, merely of adjustments of previous estimates.

An analogy of a battery

Imagine you had a dark and slightly leaky jar from which you poured out spilling a little, and filled partly spilling a little. After doing these cycles for some time, it would be very hard to tell how much is left! So you could get in the scenario where the jar were empty when you thought there were 15% left.

If you always filled the jar fully it would be much easier to estimate. (but that is not good for the battery overall life time, see below)

A trick that might help the system, if it has too much trouble finding the correct “0%”, has been given by Johan in this thread:

Try this, when the phone reaches 50% in battery level turn it off and remove the battery for a few minutes. Then insert it again and charge the phone while turned off for about 5 hours.

Now start the phone and check if you still experience this drain.

Of course this trick only goes for models where the battery can be removed without breaking the warranty.

Note that this fix is not permanent, if you repeatedly stop the charging short when it shows 100%, but before the charging icon disappears (can take an additional half hour or so!). According to the posting by rajabertie here:

Simpler variants of this trick exists, with different parts reduced. The simplest being just removing and reinserting the battery. These simpler ones may often do the trick, but as the full trick is fairly easy to do while going to sleep, I only include the full one.

If the battery gets so depleted that the phone will not even charge, there are still hope with this battery trick by Markus from here

(Where I took the liberty of changing the wording slightly)

ADD: Note that the below was written many years before fast chargers really took of. Fast charging is convenient BUT bad for the battery, see e.g. this 2018 post.

You may have noticed that the percentage raises quickly when you start the charging, but only very slowly towards the end.

The charging speed is reduced towards the end to keep the battery as healthy as possible.

The phone has a build in circuitry that handles all this to use a given power source as best it can.

Note that not all chargers can deliver the same maximum current, especially charging using a PC through USB, or a cheap (e.g. 300mA) charger may prolong the charging time significantly.

You would not be gaining anything by a charger capable of delivering more than your phone model can take advantage of.

(It would be completely harmless though, the extra potential is just never used. Like hiring a body builder to carry a milk bottle

In general chargers able to go above 1.2A would not help current phone models (any brand).

Some tablets and similar with larger batteries can use chargers with higher currents.

Most car-usb chargers do not go above 1.2A, but some exists that can deliver 2.1A and still at about US$2 including worldwide shipping. e.g. one of the two outlets of this tiny fellow cgi.ebay.co.uk/170834845305

Normally the phone will come with a charger that has the relevant maximum current the phone can use. So check the label if you need a secondary power source. On the budget-phones I would not rule out the possibility that the supplied charger could be poorer than what the phone could use.

How to care for your battery

We all want our batteries to last as long as possible, with as close to full capacity as possible, and optimally for the entire life-span of the device. This is not as simple as one could hope.

There are no doubt that Li-Ion type of battery are very tolerant to whatever you do to them of partial charging, fast charging or what ever. Especially compared to the old NiMH or the ancient NiCd types and their “Memory effect”. But still they are by no means completely indifferent.

Auni pointed me to this very interesting site

Thanks! I’ve been looking for something like that for years…

It contains this table (I added a column though)

The added last column says how many times of “full charge” you will get out of the battery accumulated over its life time with each approach. Assuming a linear deterioration of the battery from 100% to 70% of its original capacity. This assumption is backed by a graph in the article.

(If you try to plot the four points of product versus DoD in a diagram and draw a smooth curve through them, you’ll see that the top will most likely be close to the 50% perhaps a bit higher, so 60-50% DoD would be the optimal, that would be discharging from 100%bc to 40-50%bc)

“Lithium-ion suffers stress when exposed to heat and kept at a high charge voltage.”

“Elevated temperature is anything that dwells above 30°C (86°F), and a high voltage is higher than 4.10V/cell”

“The worst condition is keeping a fully charged battery at elevated temperatures, which is the case when running a laptop on the power grid. Under these circumstances the battery will typically last for about two years, whether cycled or not.”

So the currently best advice I can give is

● Once in a while drain battery deep to get calibration right

Strictly the best would be to only charge while the phone is off, and to stop before we get near the 100%bc. That is to cycle between using the phone from say 90%bc to 40%bc, and turn the phone off, charging 40%bc to 90%bc and turn it back on. This would be very impractical in real life, so we need to rely on the circuitry to not overcharge too much. And as the idle consumption is reasonably low, we can omit turning the phone off during charging, as long as we avoid using the phone heavily while charging. Especially avoid it to get heated.

Please add any additional advises, information, links and/or corrections below, so I can adjust this post accordingly.