The new version AAG153 with the August 5 security patch for AT&T can be fetched here (2GB)
https://bbapps.download.blackberry.com/Priv/bbry_qc8992_autoloader_user-na-att-AAG153.zip
Can be loaded as described here
Note that contrary to what is says by “Open the extracted folder” and execute the batch. I experienced that you need to open a command prompt (with “Run as Administrator”), change to the unzipped folder, and execute – then everything works… (Otherwise it claims that the image is wrong for the device) 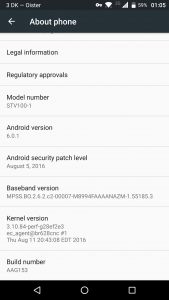 Among other things this contains QuadRooter patch