Here a few photos of my last three phones/phablets. (The Ip6- with a keyboard-case)

Note that I changed the broken screen of the Pro after I bought the Ip6-, and have not removed the protective foil. The other two got tempered glass protectors, so don’t use these images to compare the display quality too much, though the view-angle difference is quite significantly visible (The Pro IS on).

Note how thin the Priv is compared to the others. 9mm is quite impressive for a slider.

Of course a phablet is less handy in use, but the size of the screen in daily use for say browsing is great.

The pixel density of the old ones (265 resp 326) is a little low, even for my old eyes, on the other hand the Priv is beyond me in the region where I can focus – even though the claimed 540ppi is exaggerated, as the pixels are not (as displays conventionally are) RGB, but more like camera-sensors RGGB with twice as many greens, as red and blue (pentile diamond).

But never the less it looks gorgeous, and details are more crisp than my eyes can see.

My good old Pro looks like a dwarf next to the Priv.

It looks like the keys have become much much smaller, but this is in part an illusion. Comparing the keyboards ‘neck-to-neck’ 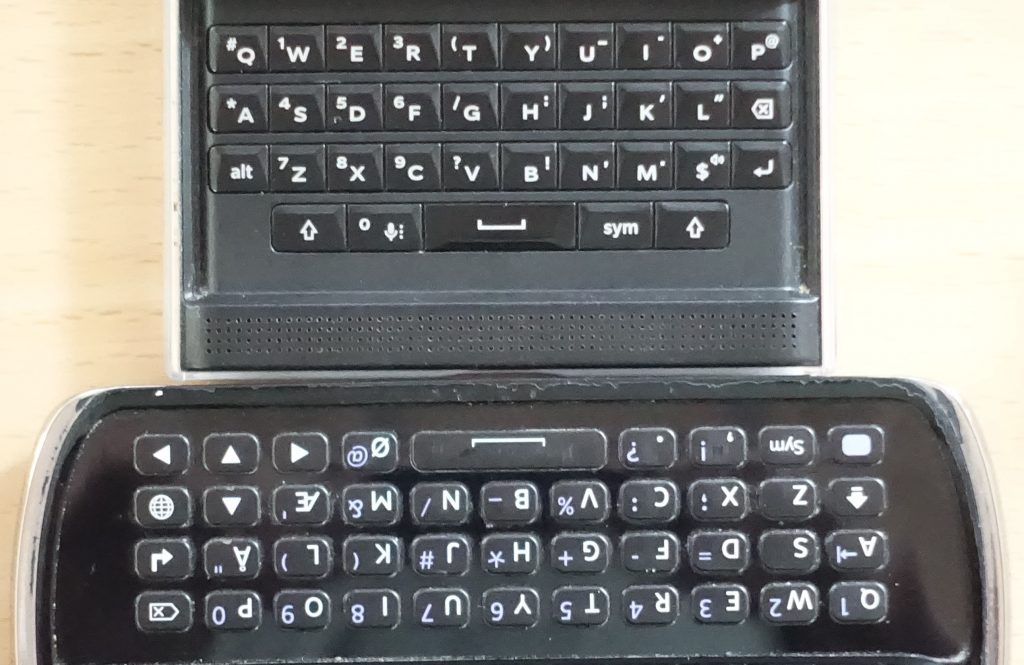 It is clear that it is ‘only’ a 9:10 width-reduction of the keys (roughly), and of course removal of a couple of keys

What I miss the most on the keyboard is the arrow keys. The navigation currently offered are simply not fully thought through, it is a theoretical solution, that does not work well in practise – but I’m sure it is just a software upgrade away.
I added a few suggestions to BB on that here.