Lightning up briquettes in a wood burning stove the top-down way, does not have to be complicated! 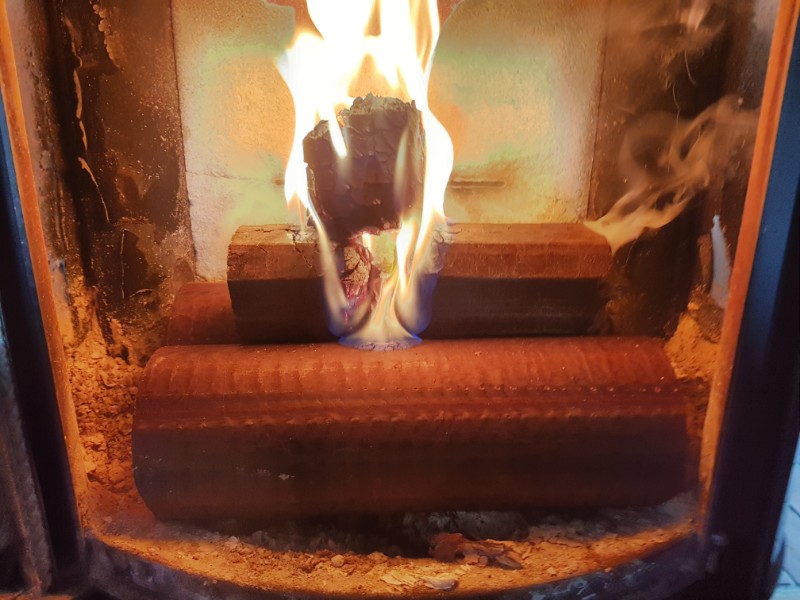 By the use the PiniKay variant of briquettes, you can completely omit all the fuss with regulating the air during the initial state, and no need for fiddling with small sticks or the like either, on my Scan-58 stove!!!

PiniKay is originally a Japanese method of pressing sawdust of beech very hard, leaving an octagonal shape with a hole in the middle. Typically they are around 1Kg each. 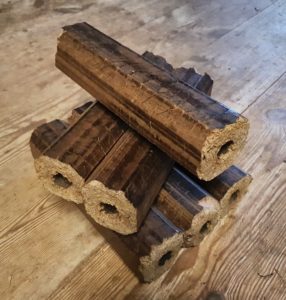 Generally they come in two variants. Chubby short or thin long. The Chubby ones works best in my experience, but the difference is not huge.
(Note that they are sold in rather different qualities, as with normal wood for the stove, the drier the better, and beech is preferable. More even burn and less ash… [*] )

The idea is to simply take one of the PiniKay briquettes and break it in three. And use that as lightning material.

The PiniKays are normally easy to break by hand, or dash two slightly against each other. The sizes of the pieces are not that important[**].

1) Place whatever base briquettes you are using at the bottom in one or more layer (PiniKay or others).

2) On the top place two of the pieces with fractured ends on each side of what ever ignition material you usually use (block or bag).

3) Place the third part as a micro-chimney with a fractured end down. [***] 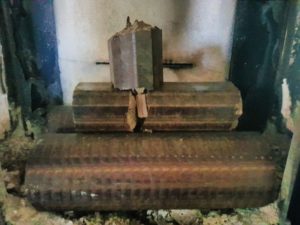 4) Ignite and close the door, and that is it! No fiddling with ‘false air intake’ or regulating anything !! 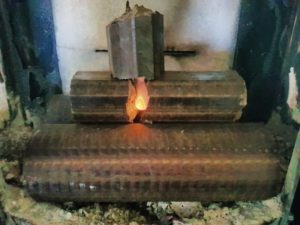 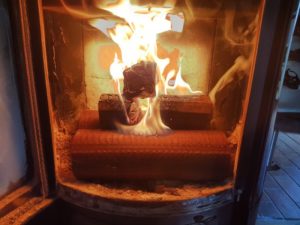 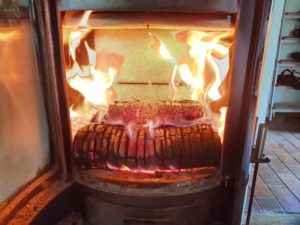 (I only opened the door to take pictures)

And the next day with the door shut. 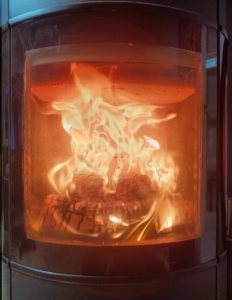 Note the lack of soot on the back and top-plates as well as the three windows, indicating an efficient burn. Good briquettes and an efficient burn also have the benefit of very little residual ash. I clean the windows a few times a year – and for ash not soot.

[*] In Denmark I generally got the best quality from BMB-Import. Among other places theirs can be bought from Fyr-Selv.dk . In 2022 I tried some of very good quality from Per Gosvig,
[**] The ‘chimney’ should not be so short that it has no effect, nor so long that it tumbles of quickly. Depending on the stove-design, you could let the top of the ‘chimney’ lean on the back plate
[***] It matters that it is the fractured surfaces that meets at the ignition point, as the rugged surfaces catches fire (even) easier than the ends.

So why is this so efficient then?

I empirically see it works well, and have used it for years. My theory of what is going on is that the three parts works like a miniature of a firing place, the two ends secure some kind of insulation against the surroundings, while still allowing an easy in-flux of air from ‘all’ sides due to the holes. The top piece works both as a tiny chimney and is also the material that is lit from underneath [***] like a traditional bonfire. And it is the material that top-down burns the rest.

Re-ignition top down before a total burn down.

You do NOT have to let the whole thing burn down and start over. 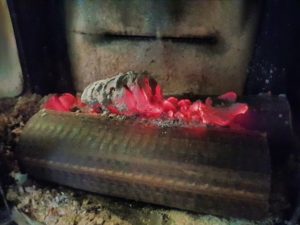 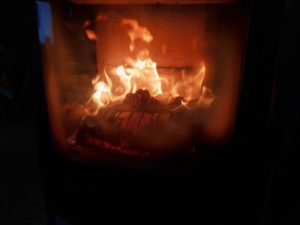 It only works efficiently when the embers are still quite vivid. Sometimes some small piece of wood or briquette on top of the embers, can help it to burn rather than glow down through the material under.

Just throwing in new briquettes on top of the fire of course works, but that will not give you top-down, and will easily lead to more sot (blackened windows), and give extra emission and less efficient usage of your briquettes.