This Automower 330X is an upgrade from my 230ACX, See review here. 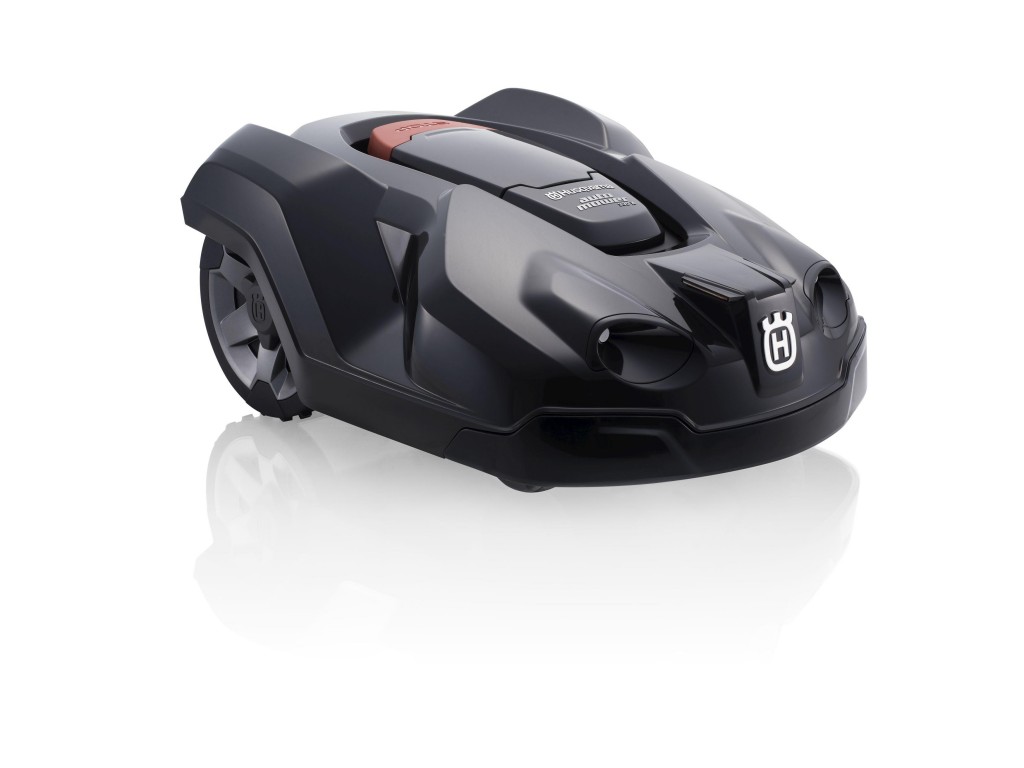 It is rather similar to the 230ACX with some important upgrades, and a few step backs

Improvements over the 230ACX

+ GPS, assuring a more even treatment of the lawn

+ Better handling of narrow passages out of the box

– The ‘wedge’ shape can course low branches to press STOP.

I was already very happy with the 230ACX, see review, so no surprise that I am with this as well.

Here is a video example from my review of TZ70 that includes the 330X:

Note the sound level compared to the birds, the dog chewing a bone, and the car passing on the other side of the house about 45s in…

My lawn was quite bumpy/rugged, I have done nothing to flatten it while I have lived here, and it was not exactly flat when I bought the place almost eight years ago. So some flattening was long overdue, and this was already ordered before I bought the 330X

So though the reduced free height was a problem at first (It hung on the belly without drive force several places), the flattening solved it. Not that the ground is anyway near a golf course, let alone a green…
But quite a silly deterioration, for those with a very neatly laid out lawn with a ‘sharp edge’ between a flat and 25% or more sloped area, this could be an issue, where the edge would need to be rounded…

The software has obviously been improved, and some of my complaints have been heard.

It no longer does ‘square spirals’, but normal ones. Simpler and leaves less patterns in the lawn.

It also now uses info on country and date, to try to find out how often it need to run, apart from collecting data on how much work it does on the trips.

The GPS is supposed to assure a more even result, that has never been a real issue at my lawn, except an area connected with a narrow steep passage, that the 230ACX had issues with visiting often enough, and could have troubles getting out of. I have seen no such issues with the 330X.

You still need to press Start whenever you close the lid – this is just SILLY, there are absolutely no point in this neither security or anything else, it is just an annoyance. When you close the lid you hear a ‘shriek’, and when you open the lid, there is a message telling that you should have pressed Start before closing the lid…

Instead of always letting it cut all it is supposed to, and then dock, have a ‘buffer window’ of say 90-100% done, and if it then ‘passes by’ the docking, then let it dock slightly early, rather than go far away mowing, and then travel back home.

The homing might be improved at bit using the GPS.  It could remember a ‘goal’ area say a few metre in front of the docking, and it could use that as an overall goal to seek for when docking, it could even mow towards this, so it had less idle run time. Of course this would not work in a complex say U-shaped garden, but for most reasonable open gardens it would be very efficient reducing the seek time

Of course we do not want the area around the dock ‘over cut’, but on the other hand, with a GPS, it should seldom need to run without mowing. I have even seen it enter the old ‘follow the wire mode’ that was the old models last resort to get home. That OUGHT to be superfluous with a GPS, after running for weeks, it ought to have a fairly accurate map of the garden and where it can and can not go by now…. Everything is being mowed as at should, so it has been ‘everywhere’.

Offer the ability to save ‘way points’ needed to get to/from parts of the garden reachable by narrow passages only. Could be an alternative to using guide cables. You could let the user place the Automover at the passage, and let it stay there for a few minutes to get a good stable mean GPS position. It could also save the approximate position of the guide cables, so it could use the GPS to move towards the guide cable.

To better use the full capacity of the battery, it could tend to go to the far parts of the garden after charge, and as the remaining power reduces stay closer to the docking, this way it could discharge the battery a bit deeper, and still be sure to be able to get home.

Addition shields in various colours can be had. Originally just greyish and white, but some are offering ‘pimped’ versions.

They OUGHT to offer some with a less glossy surface. The default cover quite quickly gets superficial scratches from trees and hedges, unless they are trimmed to let it pass under freely.
And I still think they should make one shaped and decorated like a turtle. It already looks like a big turtle anyway….

What looks like headlights is actually an offered accessory, (and not ultrasonic sensors). I fail to see any point in these….
There is a GSM-accessory also, and IF the headlights had been combined with a camera, it could make some sense to send images to the phone, now it just seems a silly gimmick…

It would be nice if there were something in front of the stop-button. Low branches of my hedges or rhododendron, have numerous times slid along the wedge shaped body/lid, and ended up pressing STOP. It would be better if it had something to stop it and turn around before this happens. the 230ACX had a better shape here, as the STOP was not the ‘highest point’.
I have also on several occasion found it trapped, with a branch stuck in the ‘gutter’ around the lid, again the 230ACX had a more thought trough physical design.

I sent it for a a check-up just before the warranty expired, and here they ‘updated’ the software, and I really wish they had not!!! This season it has had all kind of odd issues due to lousy software! They now use the same software for the 330X and 430X (it even reports 430X in the display now), but the 430X got a different battery configuration, and I assume this is the root cause of most of the errors – though not all. The last two seasons it could run for weeks without any user intervention, now there are almost daily issues to help it out, often carrying it back to the charging station – and no it is apparently NOT just worn batteries…

One of the issues is that when it ‘hangs’ on something it just continues to run until the battery is flat, digging holes in the lawn!!! It COULD use the GPS to detect that it is not actually moving, and then just STOP, reporting an error (mean the GPS position over some time, to compensate for GPS inaccuracy, especially under large trees).

After the ‘update’ it never really became good again, and 2018 was not good, and I consider upgrading it to the new 435X AWD, as this is likely to be more fitted to my uneven garden.