After many months of negotiations, BB and AT&T have FINALLY found a solution so the users of AT&T branded devices can get the newest updates without being connected to the AT&T network. 🙂

Blackberry have posted an official statement on the case here http://support.blackberry.com/kb/articleDetail?articleNumber=000038204

Previous to get OTA update you had to be connected to the AT&T network (An AT&T sim was NOT enough).

You could (and can still) wipe the phablet and start from scratch with the newest autoloader that can be found here: http://ca.blackberry.com/support/smartphones/Android-OS-Reload.html

I wiped the phablet with AAG873 just a few days ago, so being of a curious nature I wiped it again with last months AAG202 (that I luckily kept)

And LOOK AND BEHOLD after AAG202 finished installing, it asked me if I wanted it to update OTA

And believe it or not, by accepting this the phablet also gets DE-BLOATED and is now on AGG853. (Generic software on branded hardware)
That is without all the nasty AT&T bloat of AAG873.

I felt especially unsafe about “AT&T Remote Support“. But was not too happy about neither “Device Health Application” nor “Enterprise Management Client” – I had no idea what either of these did or could potentially do…

This is the bloat I got rid off 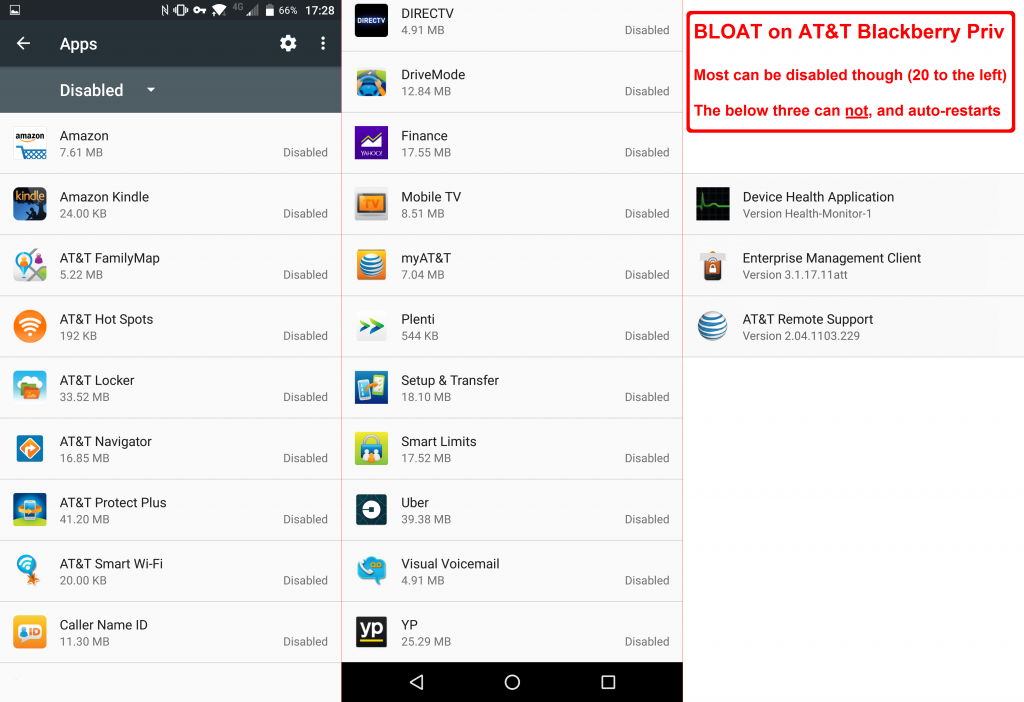 A not complete objective observation is that I feel it got a better stamina as well. Especially less consumption over night is quite visible.
It COULD be that some of the stuff that could not be disabled (even though not waking the phablet for a lengthy period at a time so it could be seen as visible usage), still pulled it out of DOZE?

They have updated the post further, with a guide to POLL for it (std. Android), if you do not get it automatically:

Should the update not show within the Notification shade, perform a manual Check-In. To perform the Check-In, complete the following;

I noted that T-mobile shares the build number with the generic one on the download page , but neither the filename nor the hash is identical.
So thought that perhaps the AAG853 I got might not be a totally generic one either… So tried to apply the generic autoloader of AAG853 (again) and it does (still) NOT fit (my emphasizing).

So the device is NOT made generic, but have only graciously been allowed to fetch unbranded updates OTA (for now?). We thus could risk this not lasting AND we have no autoloader for the actual version on the device to save for later use…

Being curious of nature, I also tried to download the tmo-variant and poked into the differences of the two autoloaders for AAG853 we got, and apart from quite different “oem.img” (not unexpected), the ONLY differences lies in the two 208 bytes small .sig files (signature I assume). And in the test code in the loaders that check for different device IDs.

I took the liberty and pushed up an AT&T version AAO486 that is NOT the latest AT&T AAQ289 to the cloud (plus some others).
See https://eskerahn.dk/?p=2110
After installing any AT&T Autoloader, the device WILL be re-bloated, BUT if it has been whitelisted for clean updates by AT&T, it should be offered an OTA upgrade to AAQ280, debloating it (I have NOT tested this since AAG202 though, and have not found this confirmed nor refuted).

It is unclear whether the ‘white listing’ were a ‘one of’ for devices that were already activated on nets outside AT&T at the time back in autumn 2016 it was announced, or if it goes for all AT&T Privs that never have been on AT&T. That is, it is unclear if it is a fixed list made back then, or a rule applied. From a comment below it seems that it could be a fixed list.