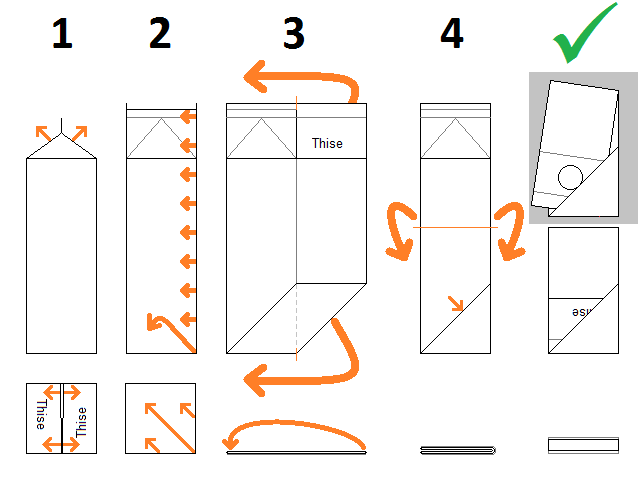 The above is the simplest and fastest way to fold it (as far as I know), And I have been using it for 40+ years…

It got the bonus that you on the folding in step 3, quite easily can get 99% of thick content like yoghurt out!

When placed naturally on a table the open end/corner will be the highest point, so dripping is quite unlikely.

It works just as well for for all sizes independent of the height to width ratio.

As a bonus, almost no force is needed in the foldings (unlike several of below variants) so even useful for people with somewhat weak hands (e.g. arthritis)

It even works with cartons with these damned spouts – though not as elegant as without. 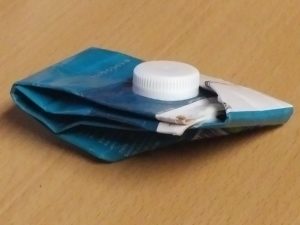 Recently (in December 2019) I found a new way to fold, that is actually better than the above I have been ‘preaching’ for over forty years… Though the new one is limited to the elongated cartons. It starts like the classic, but the trick is folding the bottom in. Note that the benefits of this one is that it requires (even) less force to fold the bottom in. It works better with the spouts and drips less. 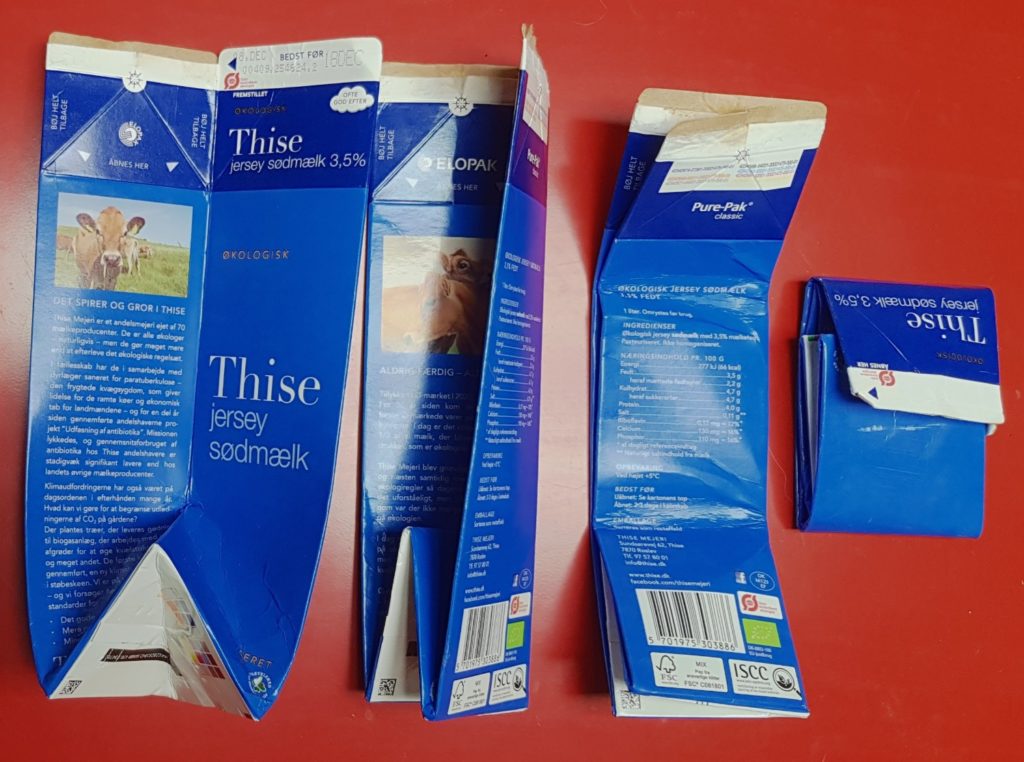 Also note that the compactness depends on the places the two last folds are made. But the more compact the more force is needed, so find your personal balance.

You can make a prettier ‘shirt like’ model by folding the bottom up symmetric in step 2, and in step 3, fold ½ sides each way backwards – a more complex folding as you are not folding along an existing fold, and you need an extra fold. This variant doesn’t work for the boxes with a plastic spout. But it IS more aesthetically pleasing, and provides a better pocket-like lock of the end than all the others. 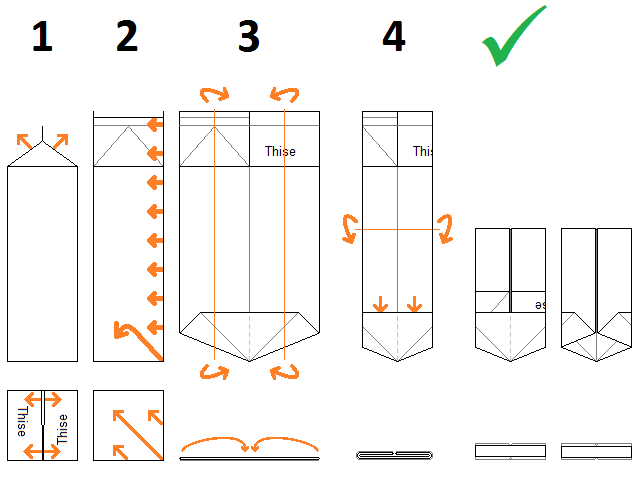 Another symmetric variant, that is a bit easier to fold. The idea is squeezing it flat rather than pressing a bottom corner it. 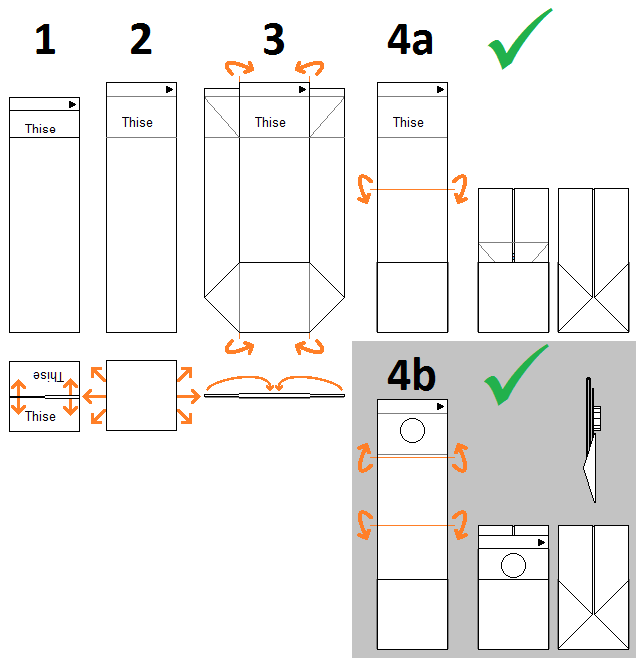 To make this work with a spout we need a little trick at the last step, doing a Z-like double fold. The rather thick fold is quite hard to get into the ‘pocket’ though, and the end is not ‘protected’, though pointing upwards on a table. The folding lines can be adjusted to find a suitable comprise between how hard it is to fold, and how compact it gets. That is how deep the top fold line goes into the ‘pocket’.

A little too hard to make a drawing, so see this collage also (click to enlarge somewhat) 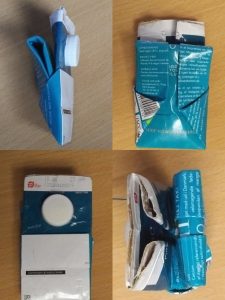 It Is possible to make a folding similar to Variant 2 WITHOUT opening the top in step 1, instead start with step 2, from the middle, but additionally press the top down ‘like a roof’. while spreading the sides. One drawback of this variant, is that it is not as suitable for ‘completely’ emptying. And it only works if the height is slightly less than three times the width. So it won’t work  for the stumpier versions common in Denmark for ½l and ¼l. 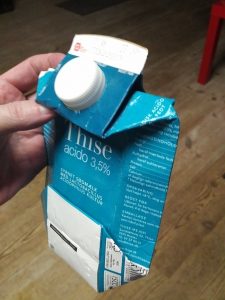 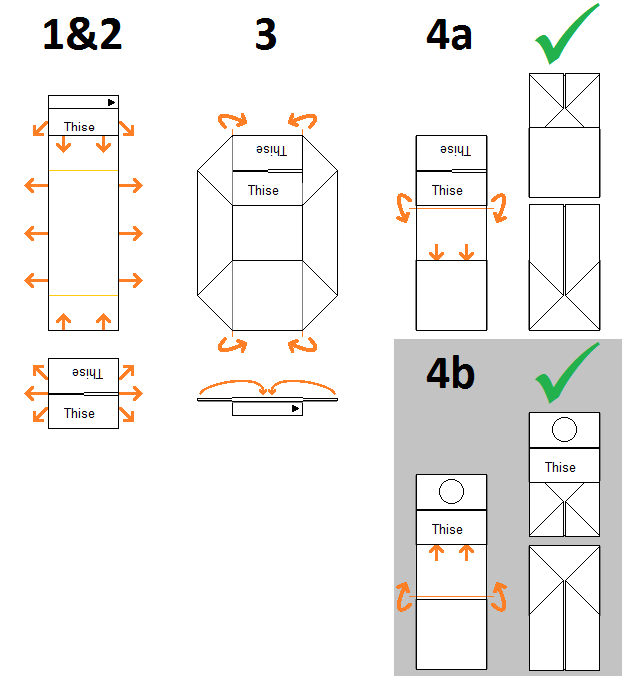 It can be a little hard to get one thick end squeezed under the other in step 4, so not for very weak hands…

And here all four variants (and sub-variants) in a front/back/side-view collage: 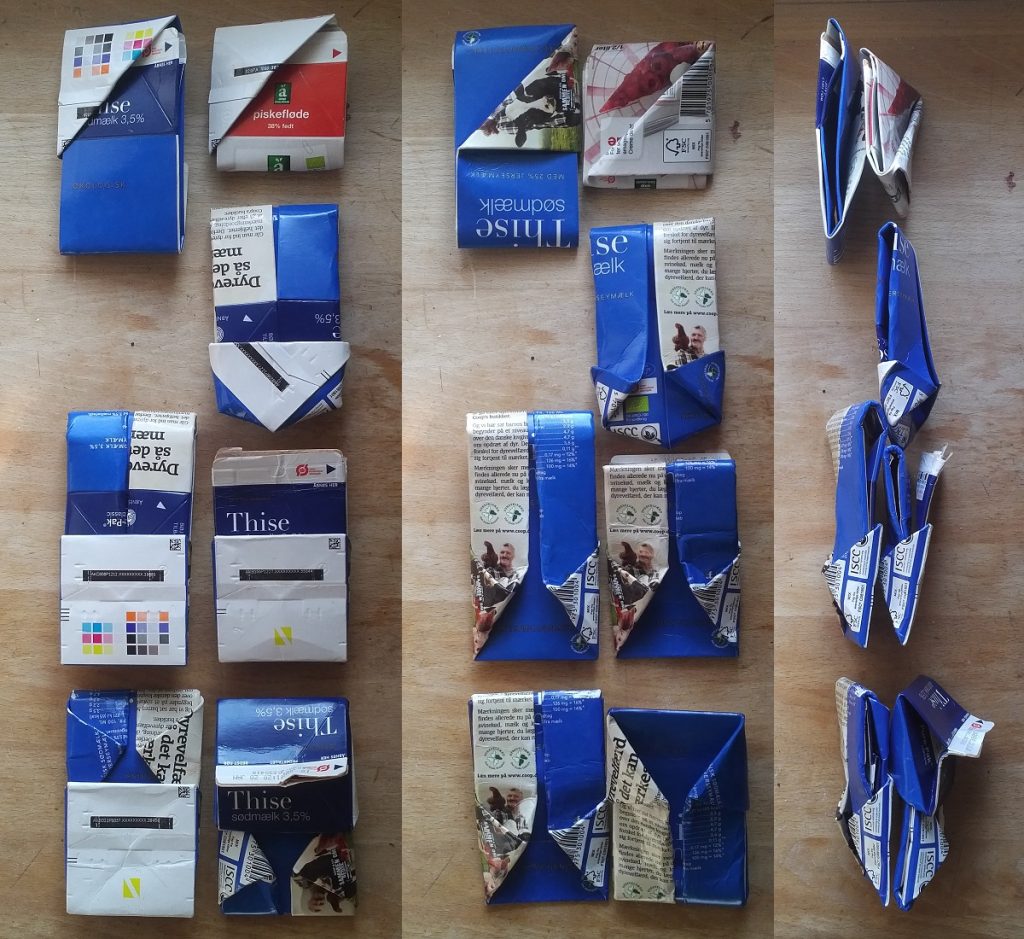 (Most side-views from the left side, though 1a and 2 from the right to keep them upright)