Since BlackBerry-phones are now seeming to come to a complete end (not even licensed devices), the options for keyboard phones are even more sparse.

I guess no one reading the blog is unaware that I go for the Pro1. 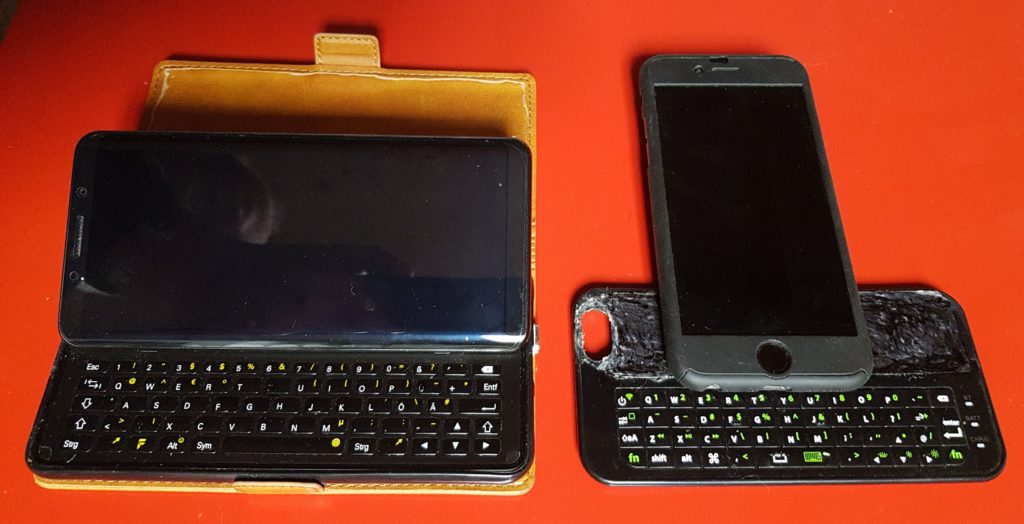 But in all fairness there are alternatives.

I see a few available options left for us keyboard lovers

1) The F(x)tec Pro1.
2) BT keyboards for slabs: Magneticly attached, cases or stand alone.
3) Click-on keyboards for some ageing Samsung galaxy models
4) The humongous big Unihertz Titan
5) The Cosmo Communicator that is more like a ultra portable pc
6) Planned for 2021: The Astroslide, a generally improved Cosmo. 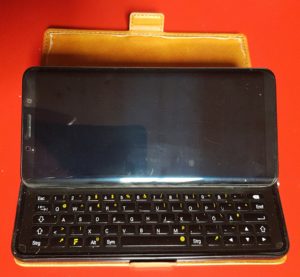 I love it, but some find it too big, or insist on using a phone/phablet in portrait only.

On 2) A BT keyboard can also be in interesting option, Either magnetically attached, some keyboard-cases or stand alone.

I like the first option best, as it (if done right) can be used with the display in both portrait and landscape AND allow you to completely detach it for a slimmer device.

It is today hard to find a dedicated keyboard-case for a modern phone/phablet (have not seen the magnetic since Ip5, and the sliders since Ip8- )

The stand alone, well this is cumbersome to use, unless you got three hands… 😉 or use it on a table.

But it does not require much (neither skills nor money) to make a DIY magnetic keyboard solution that stays within 16mm for most modern phones/phablets.

The solution I made years back was for an aPple Iphone 6-, but it should work just as fine for an Iphone 8-  and the SE2020 too. And had it not been for their horrible Ios, I would most likely still be using it…

Here some images with my old Ip6- (that I just got back) inserted: 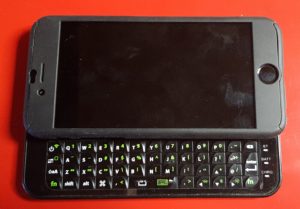 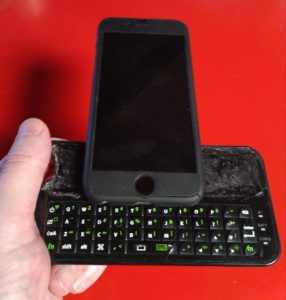 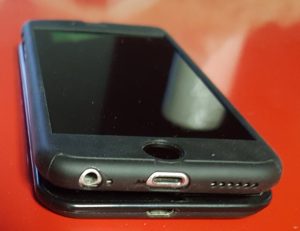 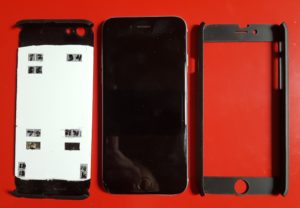 It was made from a £10 Ip6- slider keyboard case combined with the magnetic set-up copied from another case (for an Ip4) I completely cannibalised, and inserted in a £1 full-cover protective shell for the phone, like this. I had to cut a bit in the keyboard part of the keyboard case, to get the magnets in flat, and had to remove one of the original magnet-pairs, as it interfered with the charging mechanism, making the keyboard heat to the point melting the plastic (!) – so used a second case…

I just covered the whole thing with a plain paper sticker, that I just painted black with a simple marker. A better black sticker could obviously have been used, if aesthetics is of the essence.

Note how it attached in portrait, is mounted so the device is centred between G and H, that is slightly off centre of the keyboard, since you are likely to want to support the phone with one or both index fingers, as holding it is ‘top heavy’, especially in portrait.

The same principal idea could by used with any slab with a case (Of course you could also glue the small magnets directly to the phone, but unless the backplate is replaceable that is a one way street).
For many models you would most likely need to detach the keyboard to use the camera, as it is unlikely the Ip6- cut out will fit – unless you are really lucky or specifically pick the phone for it.

The great thing is that the design works both portrait and landscape AND is detachable, to reduce size ‘for the diner jacket’ to a plain slab. So can be used with lousy programs only supporting portrait too.

You can buy the magnets for cheap too, e.g. these, rather than cannibalising a hard to find magnetic keyboard.

Keyboards of a decent type are still available, try e.g. this, the top part with the case and slide is completely passive, and can just be unscrewed and thrown away… (for shipping outside the US they charge an absurd $28)

And choose a case suitable for your device, I suggest a not too soft/elastic bottom, to ease mounting the magnets.

Here an example of how the keyboard part looks placed loosely on a shell for the a much larger Huawei P20 Pro (155 x 73.9). Not that bad really IMHO… 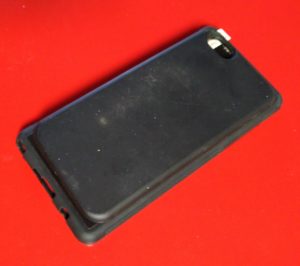 A note if you want to be creative, try different positions of the magnets before gluing finally, to find where these rather powerful magnets are NOT disturbing the circuitry of neither the phone nor the keyboard. (see above on my first attempt melting a case)

On 3) Another option has already been described here: The Galaxy S8- with a click on keyboard 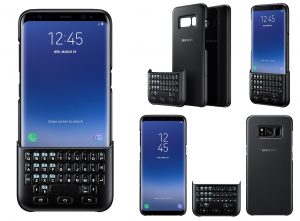 Unfortunately no such thing was sold for the newer series neither 9, 10 nor 20. And I admit, it looks horrible when attached, and is a cramped keyboard like any keyboard in the wrong direction. But for those preferring portrait, it is a viable option. And the keyboard is detachable and can be clicked on to the back or placed in a different pocket, if you do not use it that often. The shell part is the size of any other shell, and strictly they could have designed the solution without the need of the case part at all, as the keyboard itself is completely passive (except telling the phone that a keyboard might be attached, I guess to use the same Hall sensor in the front for detecting either a closed flip case or a clicked on keyboard, and to make copying harder).

And it should not be too hard to make a software keyboard matching the layout, if moved to another device as a DIY. There is NO fancy things going on, it just interacts capacitively with the screen, as you would have done with your your finger (see this for images of one disassembled – some of the earlier phone models like the S6 Edge had mechanical buttons at the bottom with mechanical interaction from the matching keyboards)

on 4) The Unihertz Titan can be found crowdfunded here. It is basically a new midranger designed over the old BB Passport, but made rugged and on Android.
To me it is the worst of both worlds. A huge device with a reduced keyboard. Despite the cramped keyboard it for the large majority is yet too huge to be used one-handed. At the least that was possible to some extend with the Key½. Here an image copied from this site, next to the Key2 for size 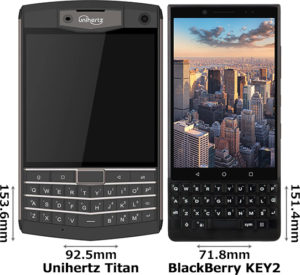 on 5) The Cosmo Communicator can be found crowdfunded here. It is hard to categorise this, as it on one hand is an ultra portable pc, designed to be used on a table, that can not really be used closed, but it does have phone functionality, with a tiny external display.
Now had they given this a double-hinge so it could bend over ‘yoga-style’, they could have saved the secondary screen, reduced the thickness, and offered full slab functionality… I have no idea why they did not do that, it would have matched a so much larger target group. As you would get a large slab and a keyboard clamshell in one.
As it is not possible to use it like a slab, it is odd that they have such huge bezels. A screen the size of the S20 Ultra could have fitted in, and yet the display is the same size as the substantially minor Pro1. Only covering 2/3 of the Cosmo’s area! 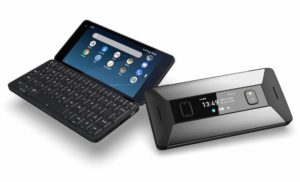 on 6) The Astro Slide (not to be confused with Astro Glide) can be crowdfunded here, It is closely in family with the Cosmo above when opened. BUT with a new sliding mechanism, that at current prototype state looks quite flimsy, vulnerable and complex, but they might get it improved before release. This should allow it to be used as a large 300g slab also. They also increased the screen to body ratio with the long 21.7:9 screen, so less wasted short edge bezels. Like the Cosmo the keyboard is 2cm wider than the Pro1 (centre to centre of outermost keys, larger device and keys closer to the edge), so Thumb-typing will require long flexible thumbs. BUT if you are only planning to use the keyboard on a table or the like, it might be an interesting product with fewer larger keys. The mediatek chipset some say is harder to do custom ROMs for, but that will only be a drawback for some users. If you are going to use it primarily as an ultra portable PC, then the simpler hinge mechanism of the Cosmo, might make you reconsider that one. The mechanism do not look promising in my book. The problem being the classic problem for sliders, as the mechanism of the two sides is not coupled you must open&close it with even press at both sides. The inventor himself struggles in their own video (from 01:00 to 01:10 here) showing it of. But again, it is early, so they just MIGHT find a solution, coupling the two rails. If they can get it to work, it has the clear advantage over the Pro1 opened with a higher keyboard area, and no screen-edge just above the keys, 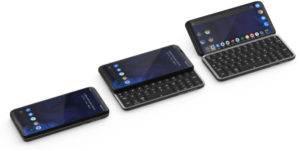