This 43″ IPS has substantially better viewing angles used close than its 40″ VA predecessor, but poorer blacks, otherwise much the same. 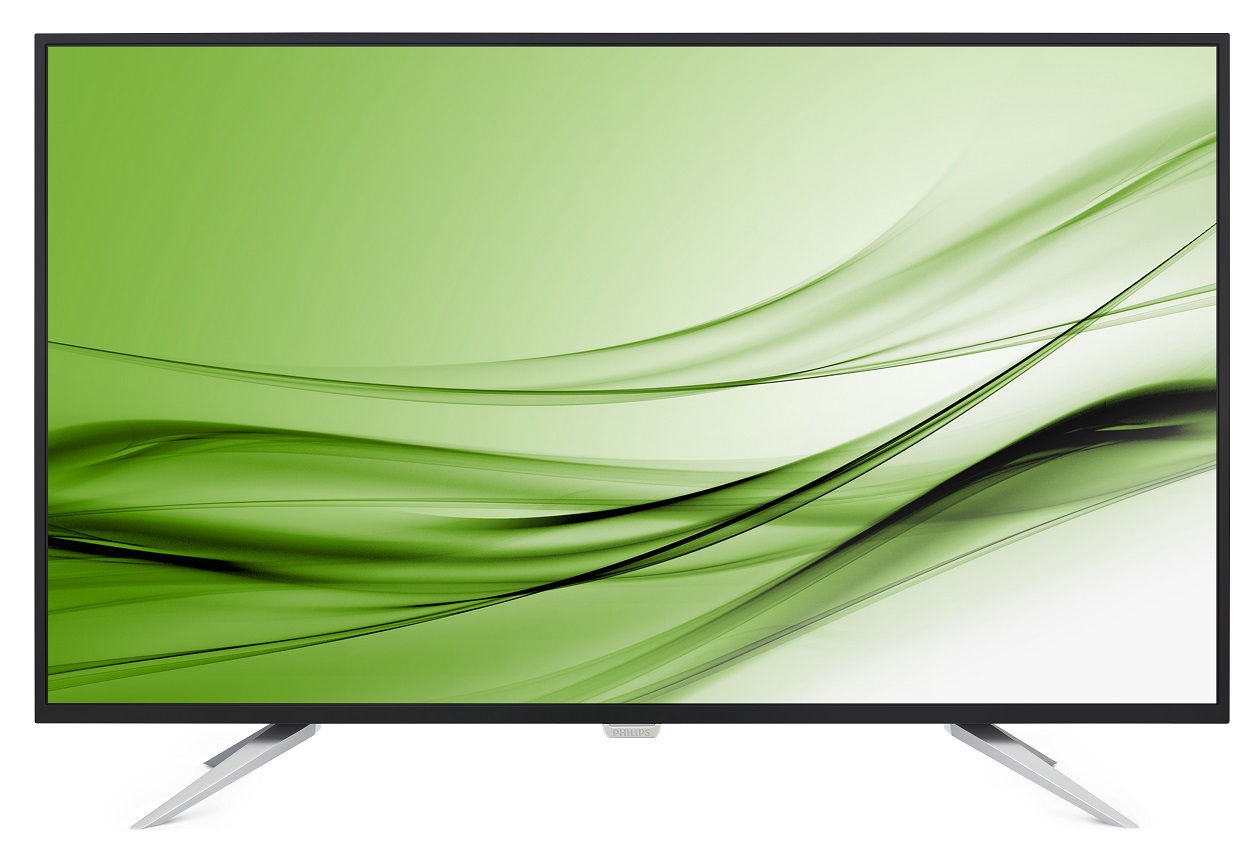 For the last two years I have been quite happy with the 40″ display, as reviewed here (see the old review on usage, as this is practically identical in that aspect)

But being of VA type it is a bit ‘soft’ on the corners when I use it at the usual distance of about 75cm on my desktop.

The ‘curved’ version has a curvature that might make sense when used as a TV, but not as a monitor. I would never use it as far away as 3m, so the curvature is of a way too large radius to really matter, to my usage (the edges curved in just about an inch). So I discarded that as a successor. But as the 43″ version has IPS rather than VA, I had my hopes up high for better viewing angles, on the cost of poorer blacks, so I ordered one!

…And got it a few hours ago, and no bad surprises (yet)

Like the 40″ one this has the USB and the power connectors perpendicular out the back, making it hard to mount it on a wall, though they both DO have 200mm VESA mount. (So quite silly it seems, but could be to ensure ventilation?).

On this one, they placed the display connectors a bit above the usb-connectors in a parallel row. The old had these going to the side from the back block (to the left seen from the front). The new placement seems like a good idea to keep the cables together, it makes it easier to tie things up neatly.

The first thing I noticed turning it on, was they they have become more sensible and have replaced the hysterical bright led, with a diffused (but larger) one. That even seems to be dismountable (I see two screws), and this would leave a cleaner rim of the same size all way round. The manual (p36) claims you can turn it off:

Unfortunately that is a lie. No such setting – even in the hidden factory menu (hold the joystick away from the power while turning the monitor on, and a new item is added to the OSD)

I tried to unscrew the two screws, and to my great surprise, they only hold the ‘large’ block of plastic with the logo!

I guess they have designed it to sell it under other names in other markets….

So now it looks MUCH more streamlined, without the logo, and with the 37mm wide LED-diffuser only protruding 2mm downwards below the frame. (The ugly 47 x 12mm silvery logo block protruded slanted forwards too, about ½cm)

The monitor rests at four point further spread (to ensure stability?) standing on two aluminium feet that elevates it 7cm (the 40″ was elevated to 8cm” on one more elegant aluminium frame). The ‘beams’ I cut to elevate the two sides of the old foot proved to short, so had to cut two more an inch longer. (Luckily I kept the rest of the beam from last time). But the further spread also means it is more stable while moving the elevation table.

Important for DP usage: As default the monitor is set at DP1.1, you need to go into the OSD, Setup, DisplayPort, And change it to 1.2, to be able to use it in 2160p@60Hz (dp1.1 only allows @30Hz). Of course this requires that your graphics card (and cable) supports dp1.2.
It IS mentioned halfway though the manual if you read it back to back…

Advertisement wise the VA is sold as 176° viewing angle, and the IPS as 178°. The difference is WAY WAY bigger than these numbers indicate!!! On the VA you should be about 1½-2m away to have a reasonable uniform image. with this it is more like 10cm… the viewing field gets distorted before the display image!

The price of this is the lack of black. I will find out tonight if this is problematic. It is not an issue with daylight outside.

Update: It is not a problem for me, but if used in a very dark room, it is clear that the blacks are not totally black.
But to my usage pattern this is by far outweighed by the better viewing angles, but for users doing image works where exact colours are important this could be a serious issue, if so you should consider a VA variant.

I tried the ‘pencil-test’ (See old review here) to see any flickering, But I’m simply unable to get anything I can see. So either non-existent or at a very high frequency.

The display area is 941mm x 530 mm or 1080 mm in diagonal, this also means the sub-pixel-blocks -as would be expected- are square (within the accuracy of my measurements). This is in contrast to the 40″ VA where they are 1.6% wider than tall.

The sub-pixels looks like rotated Vs “›››” as opposed to the rectangular ones “׀׀׀“on the VA-display. Click to enlarge 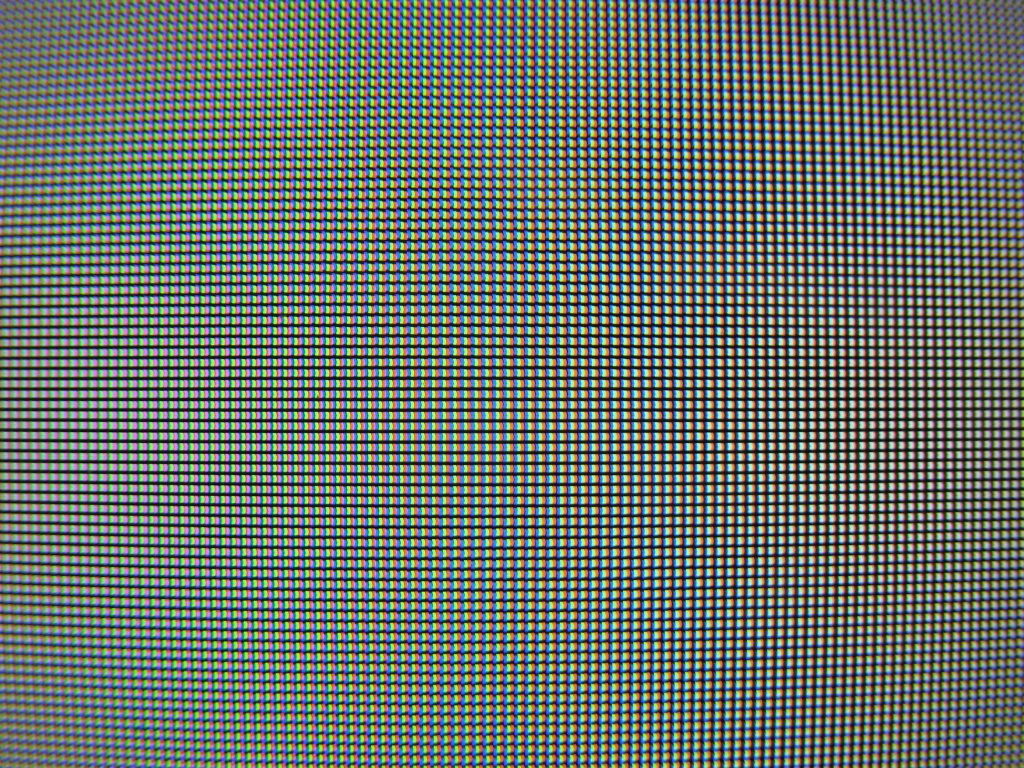 Looking carefully at this image, it is quite clear that the red LEDs are at the deepest level, then a layer with the green LEDs, and the blue at the top. This is quite normal, though it to many is a surprise.

You get a LOT of value for money with this one!

A monitor this size is especially useful for things like

(*) If the black-level is an issue, you might prefer one of the VA panel variants mentioned early above.