The BB Priv has a pretty nice stamina, if it is not too infested with bloat (mine is debloated).

Though some complains that a 3410 mAh battery is too small for a phablet with a 5.4″ QFHD display, it is enough for me.

This is with no trickery of radios off or similar. 4G, WiFi, NFC all turned on. GPS off though. ADD: BT off too.

It is actually even better than the above graph indicates. but the app is limited to show 5 days so the first 6h it was at 100% during the night.

Here are the ends zoomed in somewhat, including the minutes of last/first charge

Of course this is with light actual usage, the screen has only been on slightly over 4 hours (1.4% of the time)

But it is not an extremely low usage, it even included some TV-streaming and 1½ hour of phone calls. And a good portion of SMS/MMS (Textra and Keyboard below) 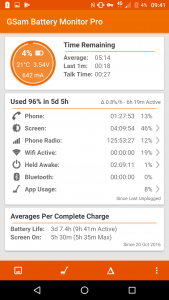 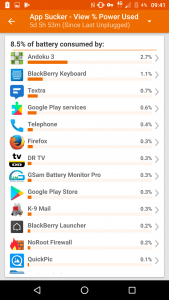 It can be seen that even with the light display usage, the screen still have ‘burned’ half the battery! (Mainly playing Sudoku)

I have several different posts in here on how to achieve a good stamina, e.g. start here.

You should care for the lifespan of the (often in 2017 unremovable) battery by having good charging habits, see this.

Here a couple of advices on how to make the best stamina out of your phone/phablet (Android, but most goes for Ios as well)

on 2. As an example for a music festival held once a year I use a festival overview app, that has no alternatives but is REALLY bad, so I have it installed during the festival only. AND explicitly stops it after each use. I use “Android Assistant” to keep an eye on what is actually running, and “Greenify” to kill all the stuff that should NOT be running in the background, unless explicitly requested to…

IMPORTANT ADD on 2: I later found out that you CAN disable a lot of stuff even if does not have the “Disable” button made accessible. See this post. 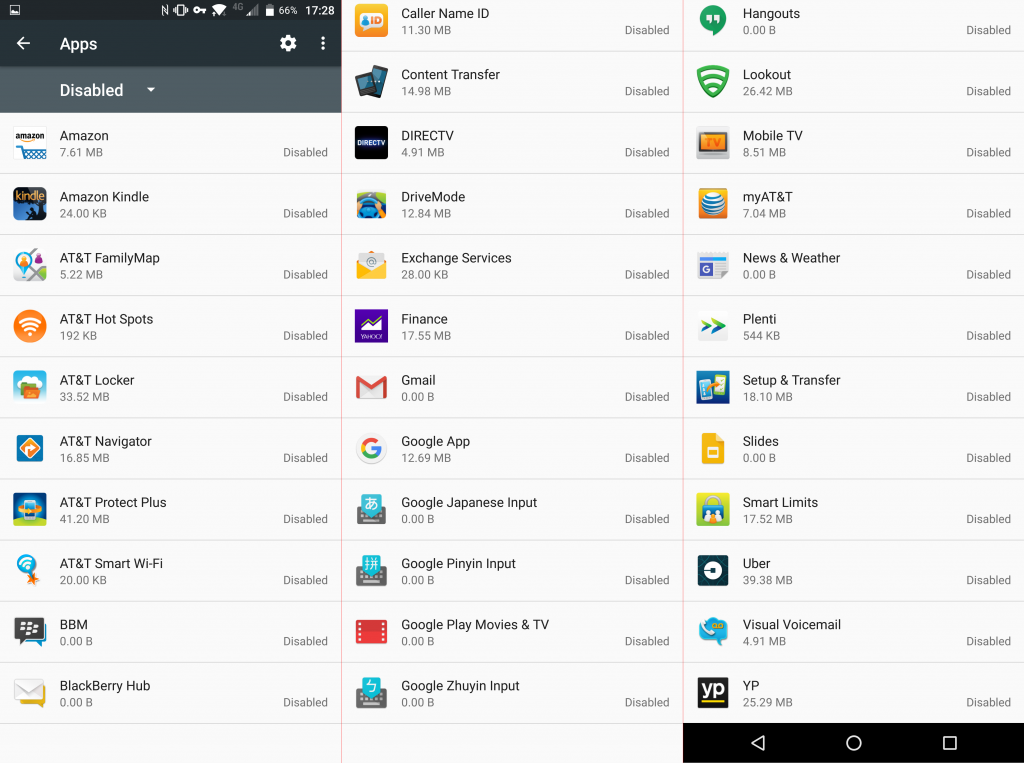 Luckily AT&T unlocked devices that is NOT in reach of the AT&T net last fall got offered a debloated version AAG853 very close to the native BB, so now I get security updates more quickly and have a lot less bloat to disable: 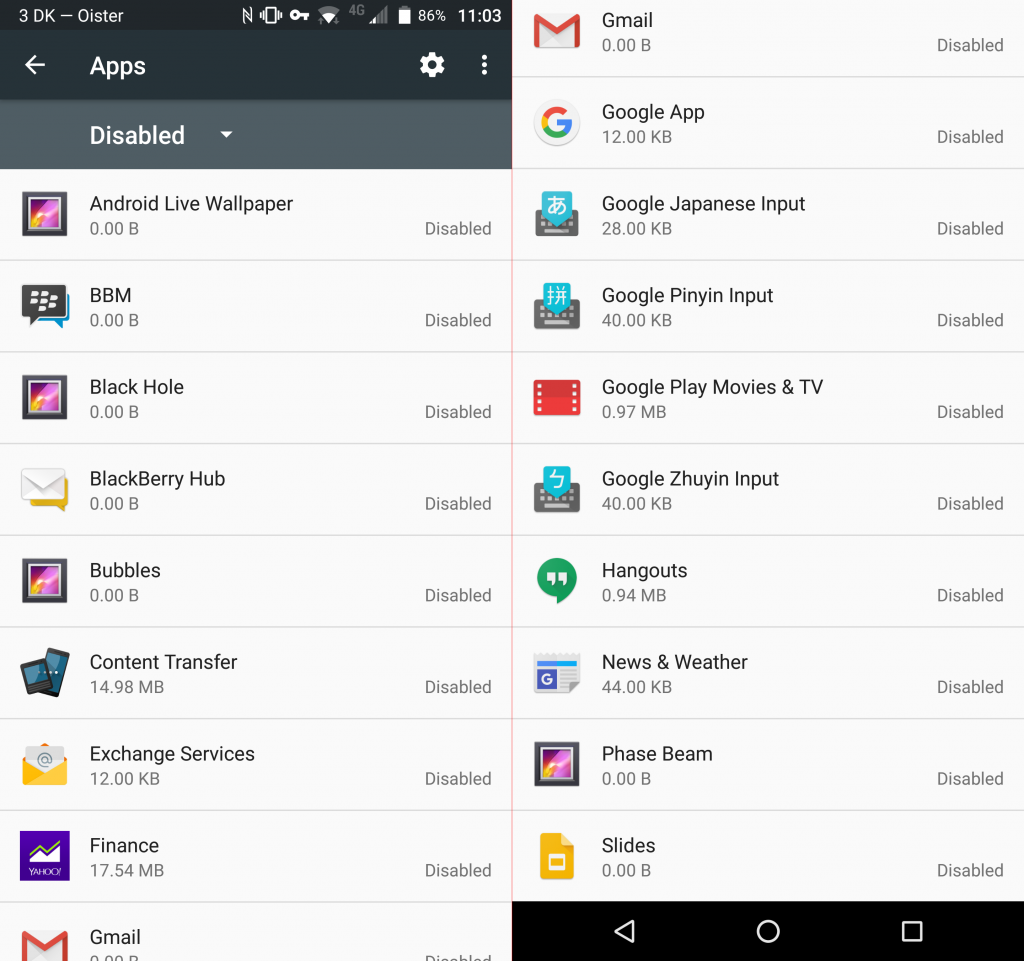 In the menu “Developer options” (if you do not see this, under About Phone click the build number trice), two items are available even when Developer options are set to OFF. 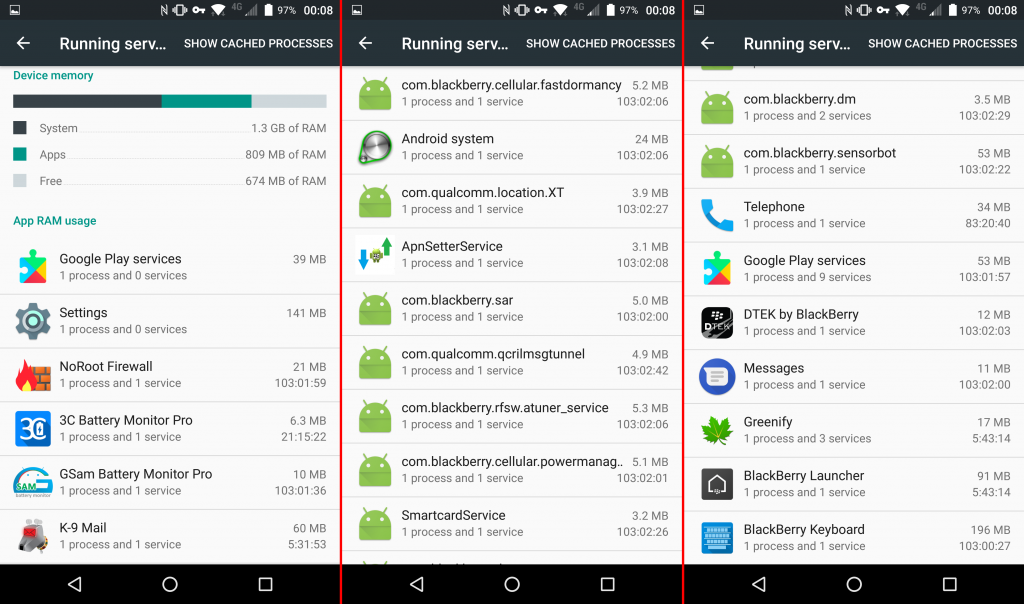 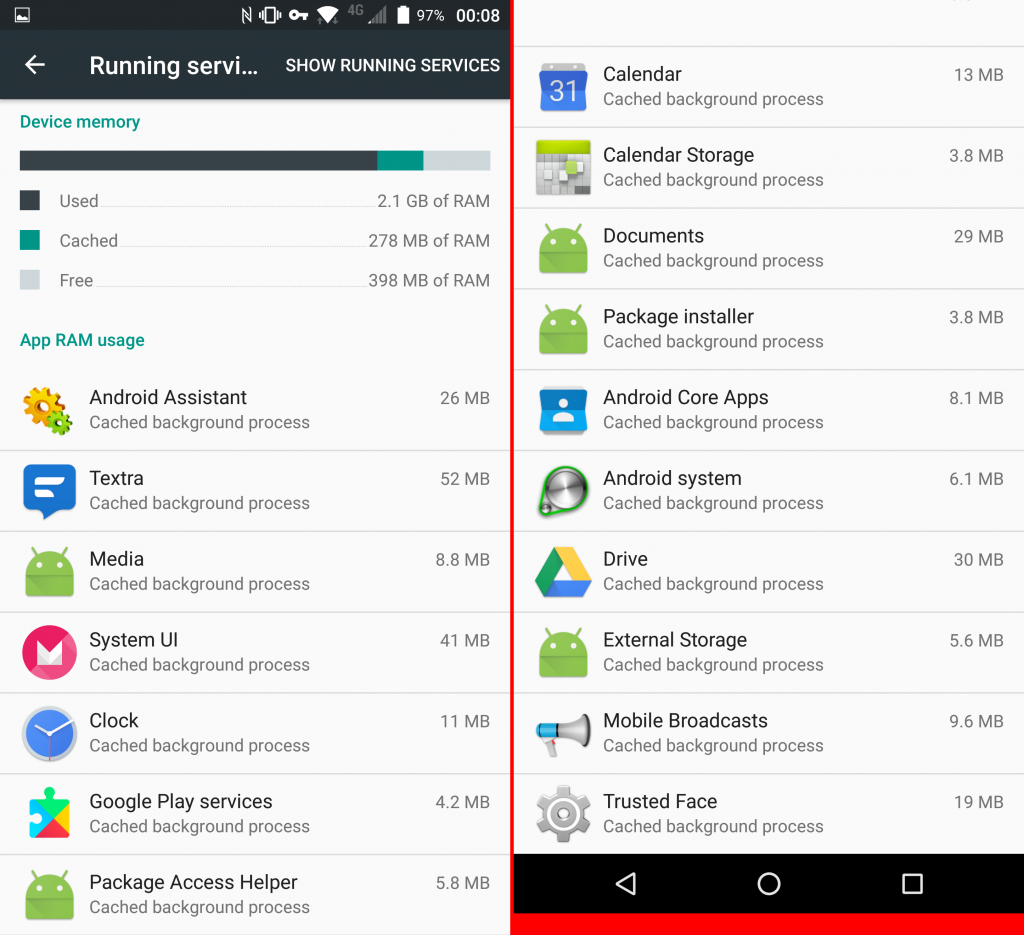 A lot of stuff is inactive (Doze)

Note the text “Active” or “Inactive” below the name 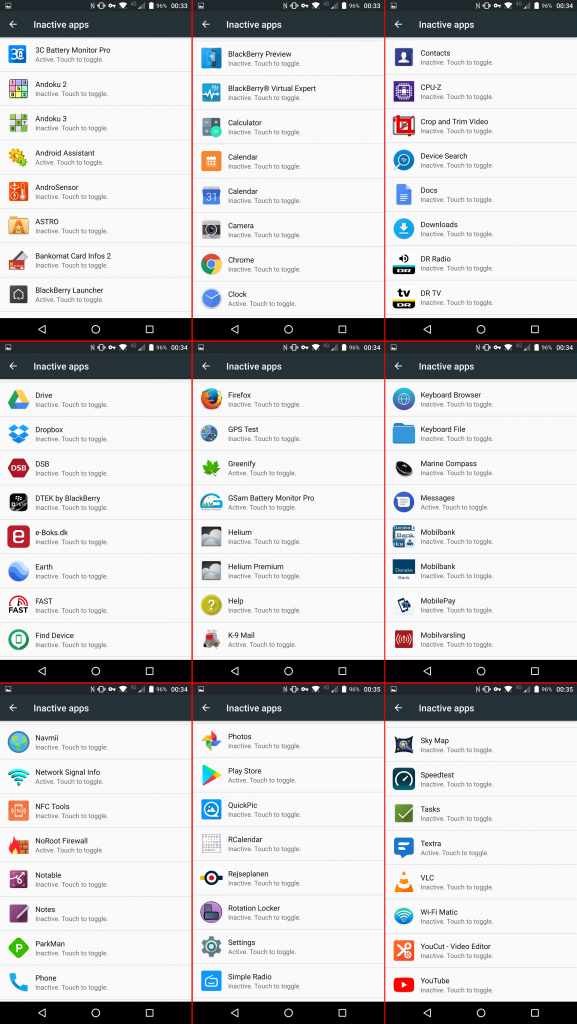 I use “Android Assistant” to have an easy look at what is running and not – and easily kill what I do not want running.

Here are (a collage of) the “Ignore List” from “Android Assistant”, i.e. the apps (including system) I accept running in the background (and no, there are no sort option, and was too lazy to manually sort them in the collage……) 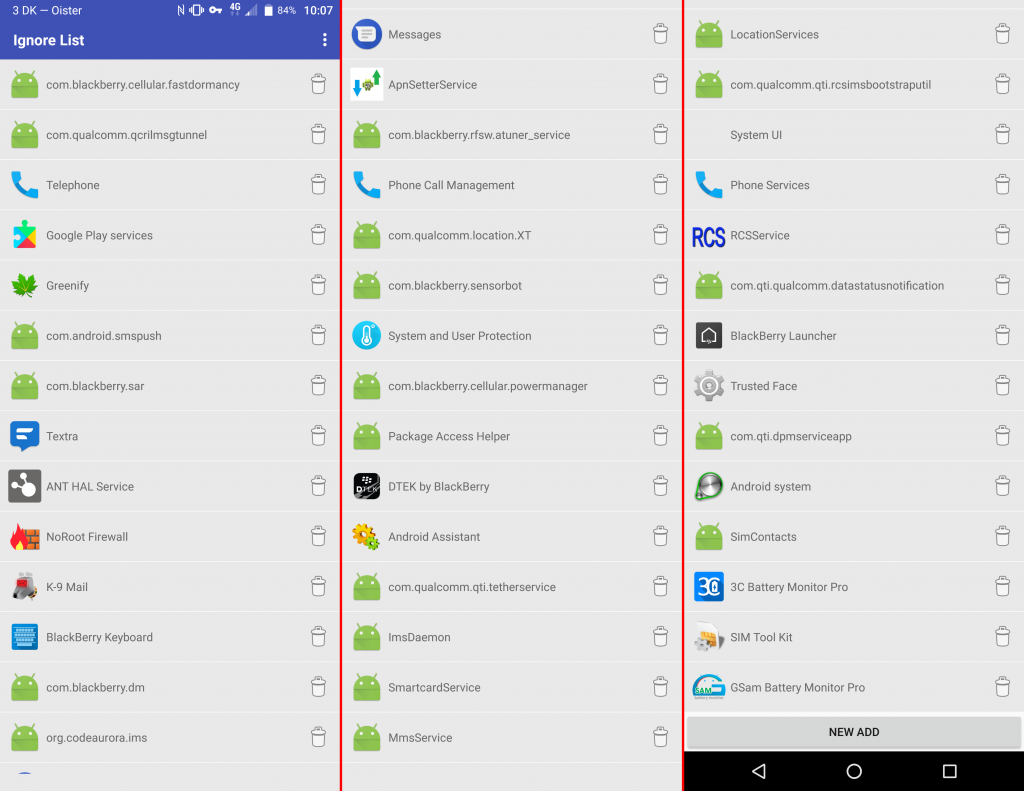 To hep me keep things that should not be running down, I also use the app Greenify, these are the ones selected to be hibernated 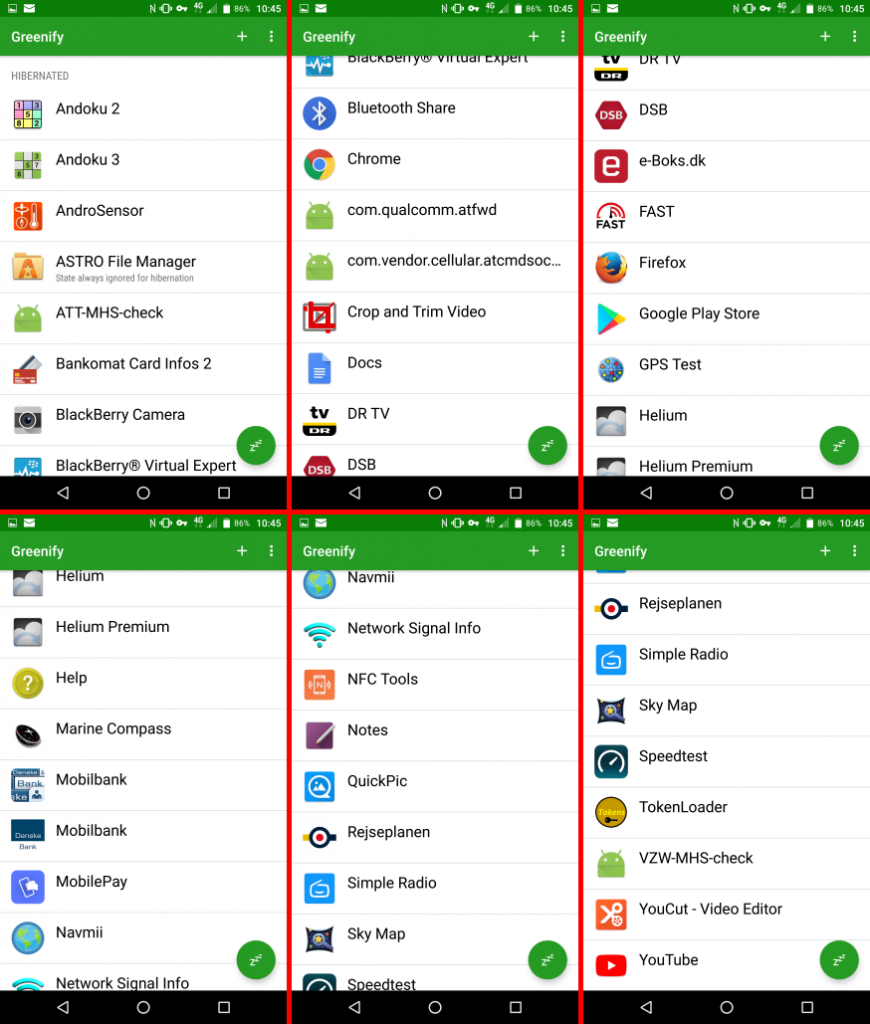 Please note that far from all of these are ill behaved and NEEDS to be held down, but much easier to request ANYTHING you don’t want to run in the background, not to do so. This way any future ill behaved version of a today benign app is already taken care of.

…Now wouldn’t it be wonderful if one of the permission available to be handled in DTEK were the ‘run in the background’. Almost ALL apps I would prefer to just freeze/hibernate until I want to use it again!!!!

I see in threads like this on CrackBerry, that many users complain about their privs, especially they are still bothered by the heat-issue, that causes the device to slow down or even reboot.
I see none of this on my specimen, and the big question is WHY?

As can be seen I’m generally a light user, primarily using the Priv for basic stuff. Texting, Mailing, Sudoku, a few calls, a little Browsing, pictures for MMS, occasional banking, occasional streaming TV. Occasionally several hours of navigation (Navmii). Plus a lot of other apps with rare and/or short use.
And apart from the Navigation and the streaming none is really heavy on the device.

I have no idea if there are different hardware sold with the same numbers (like the KeyOne with or without display fixation)?
Or could it be fluctuating quality, and that I simply have been lucky?

But I have a hunch that it all may just be due to different usage patterns by different users. The “Hub” and “Blackberry Hub + Services” I got disabled, but as these are very basic BB things, most BB users are likely to have them enabled, and they just MIGHT be (among the) culprits. (The second one is NOT needed for BB stuff like DTEK to work)

Perhaps the simple conclusion is: The Priv is great for light users, but sucks for heavy users – just a guess…