The “Battery Use“-app is part of the OS, and is located

Settings > About phone > Battery use 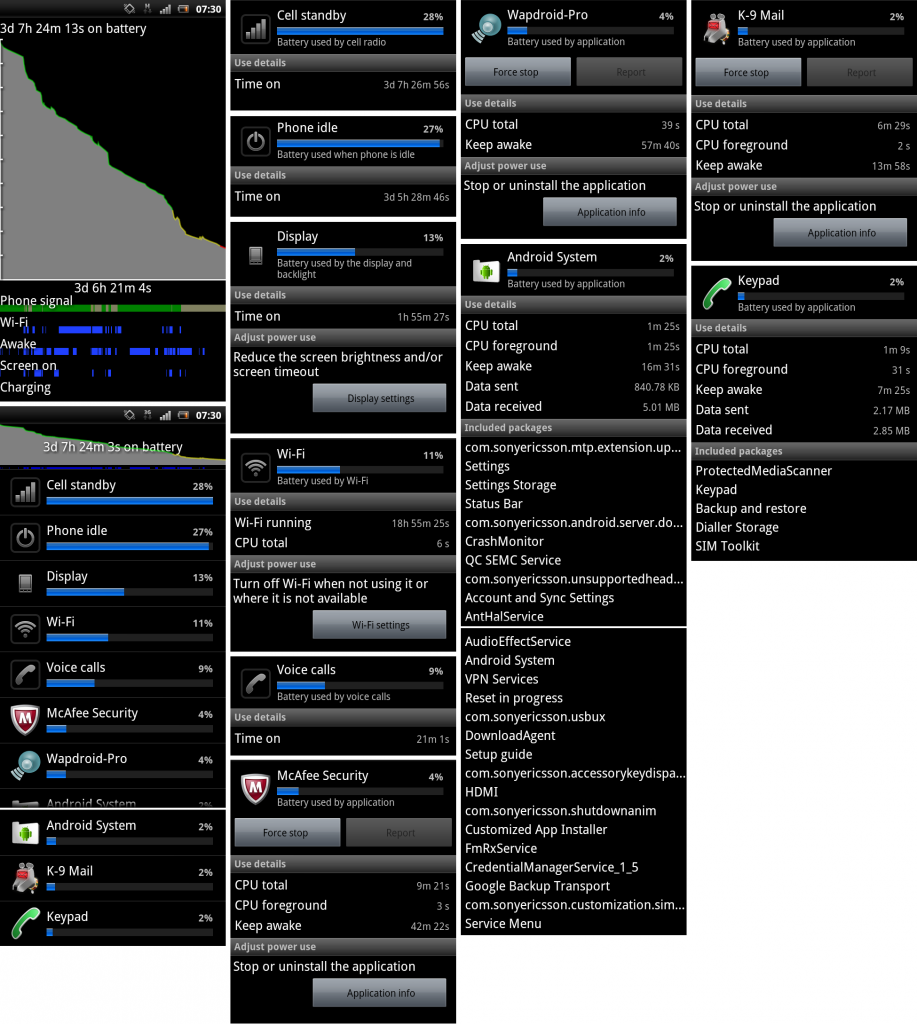 Gives a nice and compact overview of when battery was used, and throughout the period how large a portion different components had used.

It even offers some hints on what can be adjusted and where to do so.

Both closed/killed apps, and even uninstalled apps are handled correctly (the later are displayed without a name though).

Note that there are two set of ‘percentages’ in action:

2) The percentages of the fraction actually used, displayed on the list of apps under the small graph. e.g 67% used by display in the 30%bc used example would mean that the display had used 0.67*30%bc=20%bc.

So the percentages in the apps list seen isolated, actually only tells something understandable when the graph goes from a high to a low %bc. (e.g. 90%bc to 20%bc)

There are (at the least) these:

● Black : Radios off (as in Airplane mode)

The Yellow only seems to appear in small bands like in transitions. Could be sim-initialization or sim-busy, I’m not sure??

In a picture below (the ‘jump up’ one) the yellow appears at a point in time where the phone was turned off, the battery and sim removed for a few minutes, and then reassembled and turned back on. Here it is yellow on its way up during booting.

On an extended and detailed info app found, I made this thread

This app extends the information about the battery, including logging and curves of Voltage and temperature. Vital info to understand what is going on if things do not behave as expected.

This app especially helps in finding out why the “Screen”, “Phone Radio”, “WiFi” and “Android system” used what they did. And it also displays apps under the 2% limit ignored by Battery Use. Here is a collage (click to enlarge) 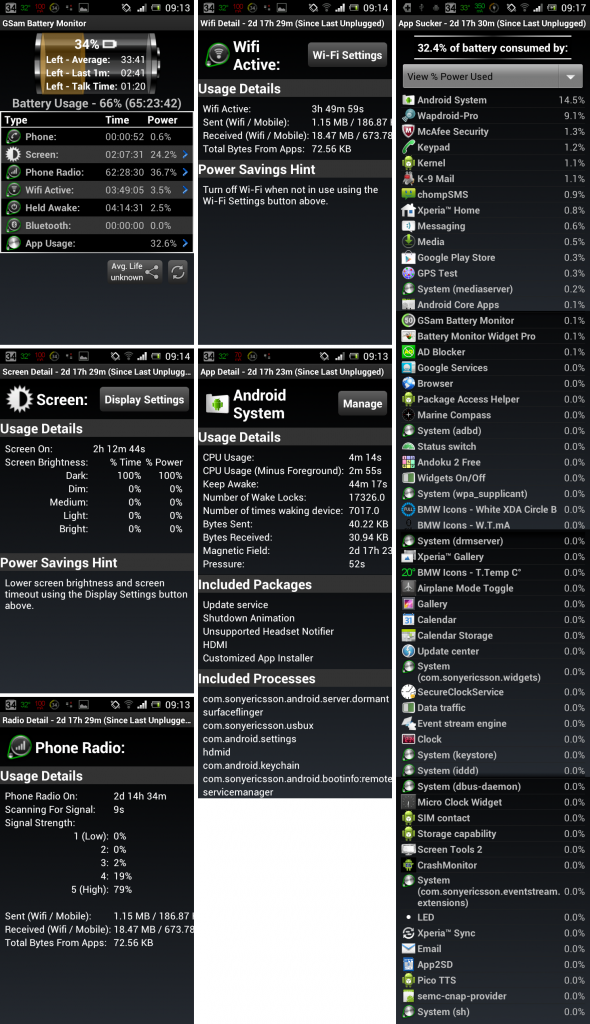 When there at some point in time is a steep dive, there is no way to find out what app(s) actually caused that specific dive. It would be nice if the ‘worst’ apps usage could be seen similar to “Screen on”.

Unfortunately only apps using a fraction of at least 2% of the used battery capacity are displayed on the list, and the remaining are NOT added into a common “Other”-category

This means that in principle we could have a bunch of bloatware apps each using slightly short of what would be displayed, and we would never know where a large part of the battery capacity went!!

An indication of that something like this is happening is that if you charge the phone fully, and use “Battery use” shortly after unplugging the charger. A long list of (bloat)apps will appear using a low percentage, and as soon as below 2% disappear from the list. (if you do the same trick booting the list could be even longer)

The theory I had here, have been disproved by the output of the GSam Battery Monitor mentioned above.

There is an odd bug, that really is most likely due to the subsystem it depends on.

Once I removed the battery and sim, used the sim in a another phone for a few seconds tests, and after reinstalling I got this

The displayed remaining battery capacity had miraculously grown from 31%bc to 48%bc!!

I do not know which of the two numbers are wrong, and the main point here is that something is flawed, and that it can give substantially wrong numbers.

So when ever the app gives a very unexpected result, take it with a ‘pinch of salt’…

(Others have reported similar issues with jumps up or down.

on this one, including hints to help the system not doing this. 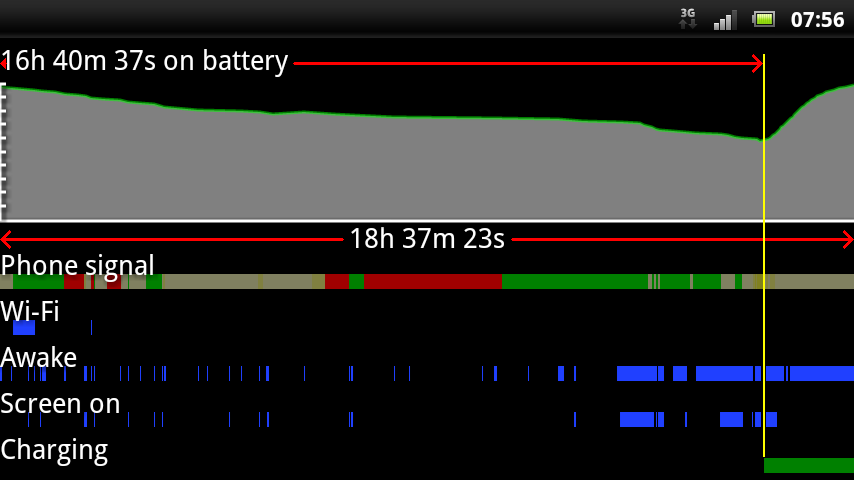 Unless you manually refresh. these two numbers can be substantially different – to much confusion.

The periods are independent, One can be longer or shorter than the other.

Note that you can even have situations where the second is “0s”, as SlimShaddy has included as an example below.

And this is not STRICTLY a bug, but still terribly confusing!!!!

But for some reason even a manual refresh is sometimes ignored. I’m not quite sure on the pattern of this, (except that there seems to be a minimum spacing of refreshes of around 75s)

But even right after refresh there can be substantial differences between the real time and the time used for display, it could be an hour of(!).

Note that it does makes sense to not always have this period auto-refreshing, as it will keep related info on all sub-screens, until a refresh. But IMHO it should not be allowed to differ from real time by more than say 15 minutes. That would be plenty of time to inspect all sub-screens.

Note also that the compressed graph above the apps fraction usage list, is thus FAR FROM always for the period that is printed on it!!!!

The phone signal and other bars under the graph are buggy!! Compare this same picture in landscape and portrait 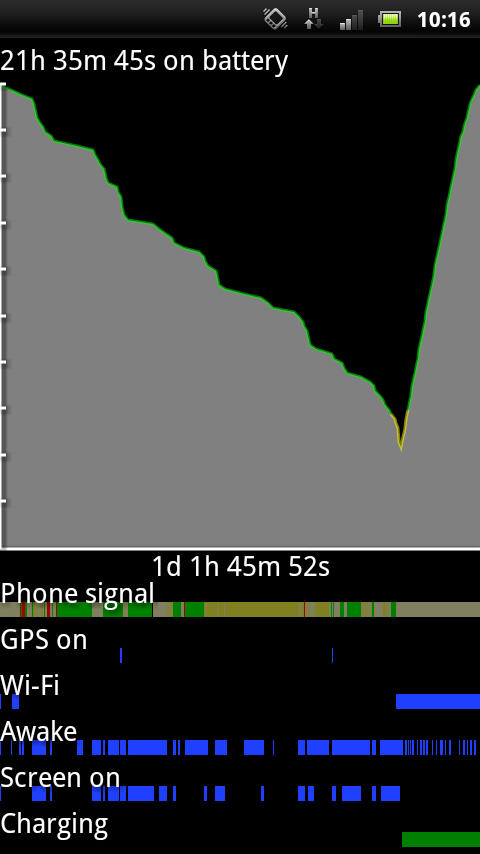 In portrait it claims that the signal was green, the phone was awake, and the screen was on!!!!!!!!

(It is the flat part of the graph. Around the “a” in “phone signal” in portrait)

Here I have made some cut&paste with portrait stretched.

The yellow ones can be explained by fewer details in a more compressed view. The red ones are BUGS!

This can explain some weird screendumps, with incorrect Awakes…. 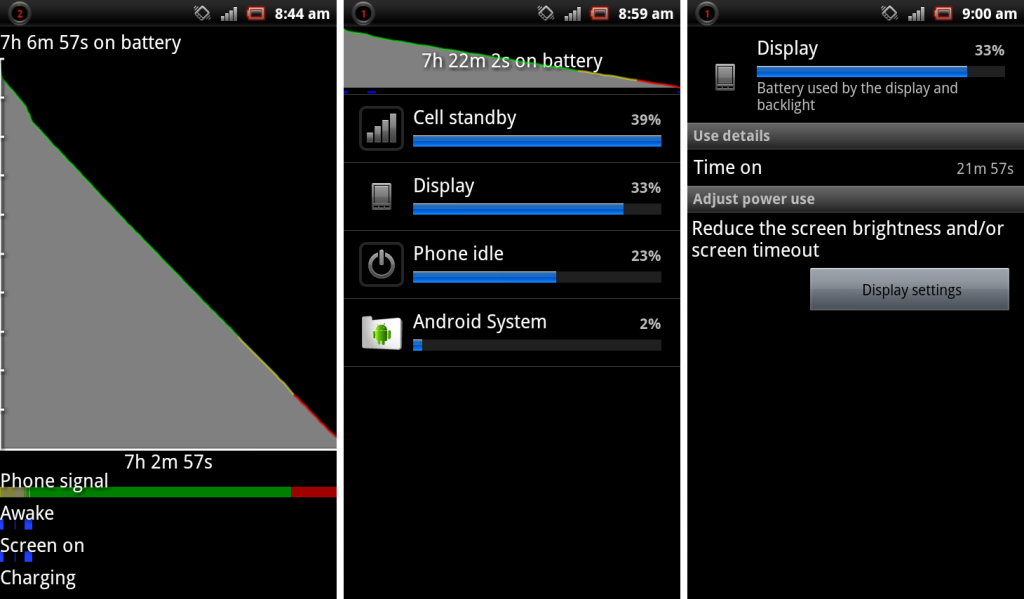 On one hand it claims that a fraction of 33% of the battery used is used by the display in 22 minutes, on the other if you look at the blue stripes where the screen was on, the total drop in these periods is FAR less than 33%bc (a rough estimate is 8%bc).

So something is obviously completely wrong in what it is claiming here!!!

It is as if the real culprit in his fast discharging is totally omitted from the list and the distribution????

On all the ‘cons’ and ‘issues’ do not see this as complaints or thing that I expect will be ‘fixed’.

It is all added here to make it easier for others not to waste time on misunderstanding unexpected or strange output, that are (well) known issues.

The collage at the top is made of screen-dumps taken within a few minutes (except the second part of the included packages lists I forgot).

They are taken right after a attempted refresh, and yet there are some oddities:

Note 2: The time displayed in details “Phone idle” is “3d 5h 28m 46s”. Adding all the “Keep awake” and the Voice call times gives more than the total period. The only explanation I can offer for that is if two (or more) apps requests the system to be awake at the same time, and are all noted for the request.

Note 3: Apparently the Android system has only used the CPU for 85 seconds in the whole period, that is about one second per hour – pretty impressively lean given the long lists of included packages. Can this really be true?? (There seem to be more realistic output from the screendumps from ICS I’ve seen).

Note 4: The “Phone signal” is amazingly UN-stable, and suspiciously bad as the battery wears out. For almost all time these three days the phone has been on my table at positions where it usually have about -73 to -71 dBm (20asu) when I check.

Note 5: The “Awake” time markers under the graph are pretty misleading, indicating that it has been awake almost half the times. My GUESS is that a blue marking here should only be interpreted as the phone has been awake for PART of the sample-period, not necessarily a substantial part.

Note 6: There are several minor upward spikes. Many of these are without prior deep falls, so it can not be battery restitution, I assume this is due to the underlying system reevaluating its estimates.

On the note 4. I noticed this on many many dumps, but never really paid much attention to it. But as many see poor stamina on 3G and I recently saw a thread on problems with keeping up 3G speed, I think there could be an issue with the Xperia 2011s here…

This section on the basic underlying battery stuff, has been moved to this thread

(See the link above for an explanation of the sketch)

A trick that might help the system, if it has to much trouble finding the correct “0%”, has been given by Johan-SonyXperiaSupport in this thread:

Try this, when the phone reaches 50% in battery level turn it off and remove the battery for a few minutes. Then insert it again and charge the phone while turned off for about 5 hours.

Now start the phone and check if you still experience this drain.

It shows an example where I obtained 4½ days of standby with very light use, and no fancy ‘cheating’, 3G and WiFi were kept on.

Used in “WCDMA Preferred”-mode, and seldom used, it eats about 1% of capacity per hour (including mail check every half hour using WiFi or 3G)

Input:
Please add any additions and/or corrections below, so I can adjust this post accordingly.