We all know that the screen eats a lot of power and the brighter the worse.

But it was new to me that blue is so much worse than red and green on Amoled.

And also that even almost zero brightness is rather costly 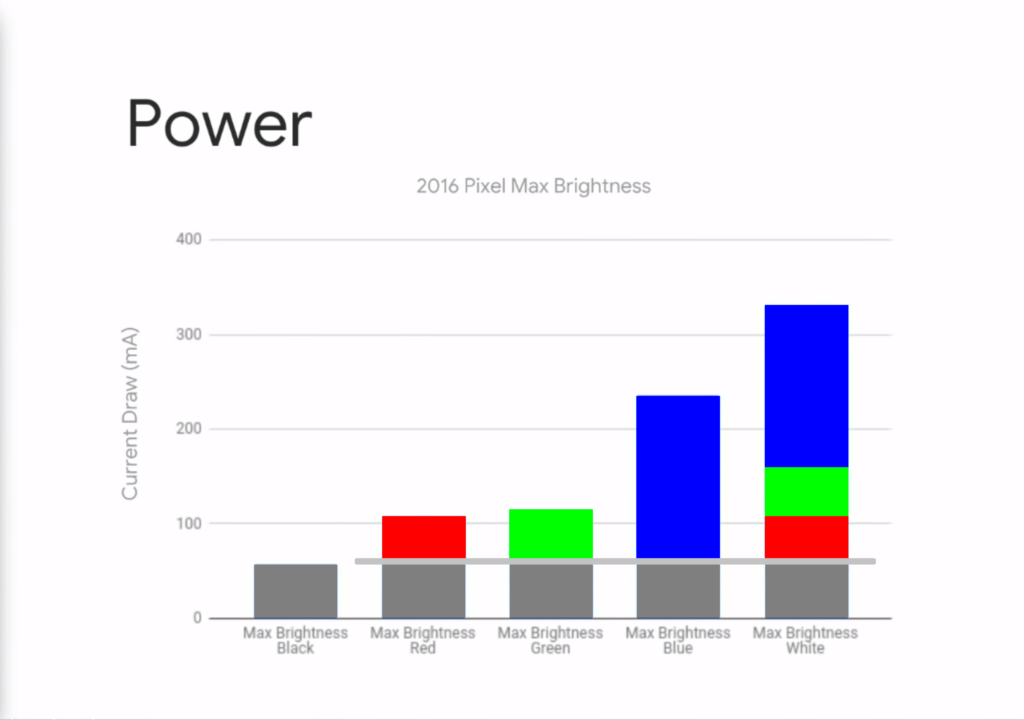 I have coloured the graph above, to make things more clear, compared to the original.

There is a base consumption per pixel even when black, and then a slight add if any colour, and on top of that a contribution with a ratio of roughly 1:1:3½ for R:G:B

So it is VERY clear that it is MUCH better to use a e.g. a pure yellow print on black than white on black. And it will have half the consumption at practically no loss in readability (24/12/7 points text from MSPaint) 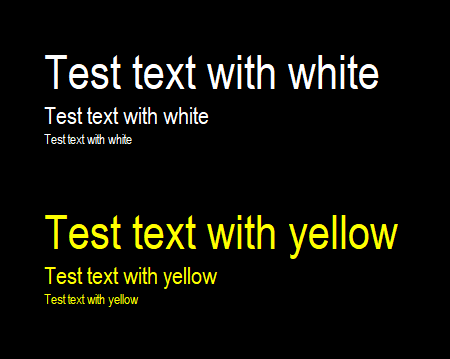 Here a picture from the video extended, (it is a bit misleading in the video, obscuring the offset), 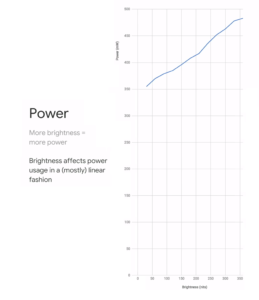 If I understand it right, it is Google measuring on Amoled. It would be interesting to see if this small difference between full and zero brightness also goes for LCD. I assume LCD drops more with low brightness. (but do not know)

Here are some more pictures cropped from the video

The first with a really strange selection of hues to represent the colours…. Click to enlarge 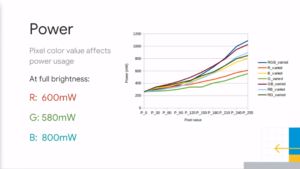 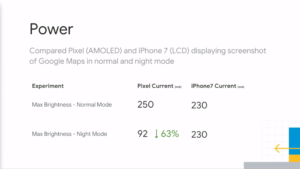 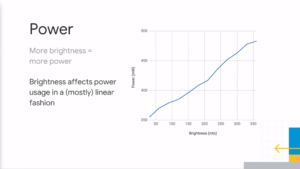 (the last two being the ones I elaborated on above)

Error?
There must be something wrong or inaccurate in some of the above… Even the lowest Green of the coloured rises faster than the last “Power” graph??? Could be that it is the units on the axis! The blue representing RGB has a similar shape to the “Power”, and they begin about the same place, but the first end at about 1100mW and this seems much more plausible than the 480mW UNLESS the later refer to some mostly dark sample image, and not a white screen??

Samsung offers a Blue light filter on the S8, And I saw this as an attempt to please the ‘Nordic’ taste, that find pure white bluish. (Since we culturally have lid our rooms with incandescent light bulbs, and earlier candles and fire places)

But it might actually be an effective power-saver too. I will definitely try it. Though I find it a little bit TOO reddish for my taste.

ADD I have now used the blue light filter for about two months, and have totally got used to it, so I suggest to try it out if you got it…