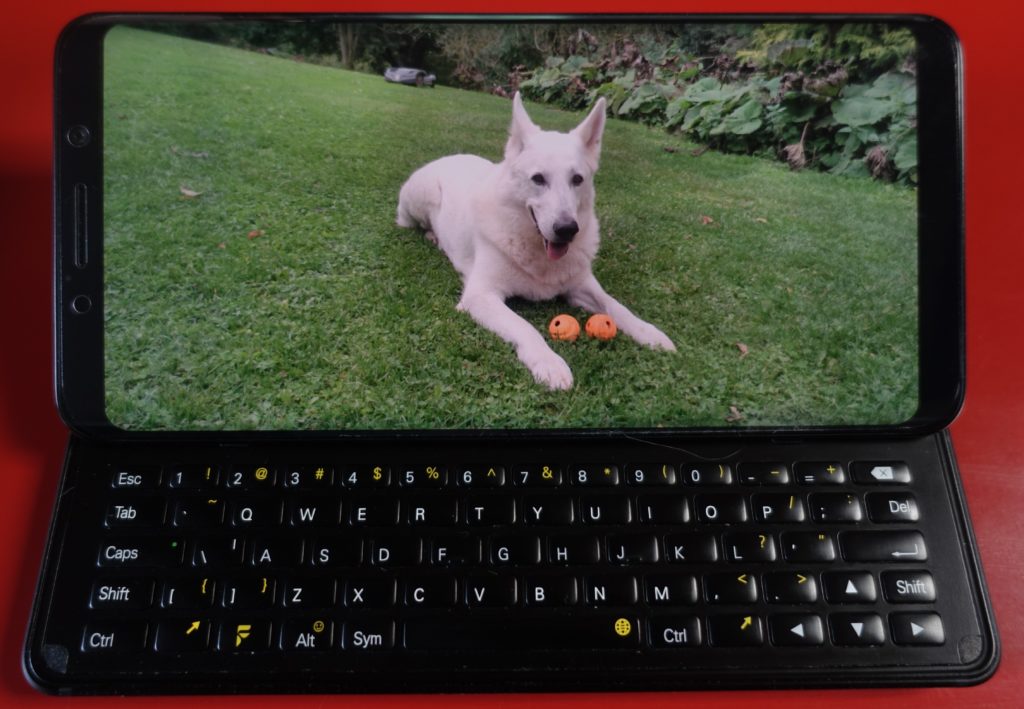 I have eagerly been awaiting the Pro1, and have earlier posted a preview of a pre production unit.

ADD: Got the real thing on Nov 19. The unshifted qwertz variant, see this. 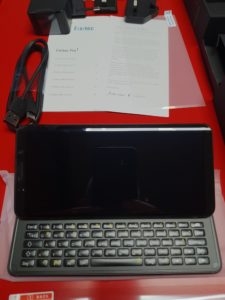 I have now had the chance to use a “final sample” for some days. And you can really feel the small physical details that have been adjusted to give a better product.

But the overall great experience is the same, so rather than repeating myself, I suggest you start with the old preview…

I immediately applied a curved screen protector, but did not do a good job, so you might see some air-bubbles if you look closely

The whole thing have a really exclusive feeling about it. You get the clear impression of serious business, and a device meant to be used, not just a flapsy toy, that goes for bling-bling rather than usage (yeah most brands could feel I’m targeting them here…). I think Jerry is really going to hurt his thumbs bending this one…

The physically visible differences to the early unit can be said to all be minor stuff in themselves, but adds up giving a better total feeling

Better camera button, better button paint, adjusted prints, better material around the keyboard, paint on the back of the screen, modified camera protection ring, modified volume rocker and power button design, better sim/tray, and not the least easier serviceable…. And these are just the things I noticed…

An important detail is that that they made it even more serviceable(!) so now (almost) everything can be handled with a screwdriver. I can not wait to see the verdict from e.g. Ifixit, they are going to have a field day!

F(x)tec achieved this at this late state cutting two small corners in the plate surrounding the keyboard (See lower corners in images above). And behind these stickers there should be some screws.

So, as I understand it, we should now be able to completely disassemble the device accessing screws behind stickers, only leaving the keyboard on the support plate, and that will merely require a heat gun to release. Really great job, and just about all brands and models should feel ashamed here….

In some videos, looking close, it at first looks as if the whole keyboard ‘gives in’ while pressing, but actually it is not, you got a solid bottom of each key. It is merely the surrounding plate between the keys that can flex, if your finger press more than the key. So no worries there (either). If you press the plate down with a nail between the keys, you can see the surrounding keys moving slightly, but not enough to get activated of course.

The camera got an ever so slightly protruding protective ring, that on one hand lifts the lens from the table, to reduce the risk of scratches. But on the other does not lift it so high that the device wobbles used on a plane surface (as the preproduction unit did slightly)

Here an exploded view of a slightly older model from a tweet  (Where I have taken the liberty to rotate the display base 180 degrees to avoid confusion, as it was placed top down) 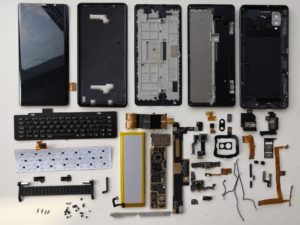 Note that this is a slightly older model, without the corner cut-outs in the keyboard. That one was harder to open than the new design.

For those wanting to dig deeper into the device, the FCC-approvals can be found here it has a lot, including internal photos

I really like how elegant the antenna lines are faint indications on the back, that at first can look like different reflectivity due to the curvature toward the ends. But if you look close, or have the light falling from a different angle you can clearly see the bands. Making a technical necessity for a metal back into a subtle ornament is really elegant IMHO 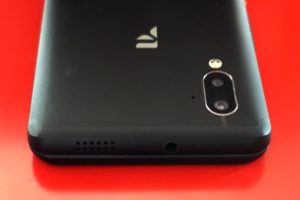 The software is extremely close to native Android, with only the needed modifications and additions to use the hardware. E.g. a launcher supporting landscape properly.

Currently the key layouts offered works, but does not really use the potential of the keyboard. Here something like FinQwerty already supporting the Pro1 can help a lot.

I have bought the QWERTZ version, and expect that to be an even better typing experience using FinQwerty.

There are a few other software issues that would benefit from being perfected. I have reported these, and hope they will be ironed out before release, along with some ideas of options to improve the user experience further. But will not obscure this review with those at this point, as they may be gone once the device hit the streets.

They already got OTA updates working, even got them on the pre-production unit (through WiFi)

Shifted or not shifted.

They are offering the keyboard in two variants. A (very close to) German standard QWERTZ layout and a partly shifted US like QWERTY .

The idea of shifting the A-Z part of the US variant might seem a bright idea at first, but let us try to dig a little deeper…

IF we assume you use this keyboard independent of how you use a PC keyboard, it makes sense to have the A-Z centred by the shift, and you can reach the G from the right or left with the exact same same stretch.

BUT if you are going to use the keyboard the obvious way of letting the right/left thumb do what the right/left hand would do on a PC it is another story….

They even added anchors to F and J indicating that they expect this usage.

On a PC you use G from the left and H from the right.

So this means the shifted layout will give you slightly more stretch of the left thumb than the right. For the unshifted you will have the (almost) exact same situation swapped with the right stretching slightly more. You could argue that the stretch for the Y will be longer for the right thumb, but is this really worth the ‘price’? I would rather suggest that people change to typing that particular key from the left, if it proves an issue for them to reach from the right.

To make things worse they have only shifted the letter-rows. not the number row, so the two parts gets misaligned to what we are used to.

So call me old and conservative, but I fail to see the shift as beneficial for more than a small fraction. And it comes at the cost of a less intuitive unconventional layout, and thus typing errors and/or learning the differences.

Especially if you are using any language with national letters usually to the right of the A-Z block, the QwertZ will clearly be a closer print to what you are used to, than having them hidden on various unexpected keys. We that are using languages using qwerty-based layouts just have to ignore that the Y/Z print is swapped!

I expect to simply try to black out the Y & Z print of the QWERTZ, using it for Danish & English QWERTY.

Some have wondered why I call the qwertZ for “unshifted“, and not e.g. “non-shifted“. The reason is that is that the keyboard in the standard rom of the Pro1 is always shifted, and then by the national-layout-map only is shifted back to standard for the qwertZ. (The electronics is 100% identical for the two, only differ in prints)

ADD: Here a compare with the two, with some helper lines, as you can see the centre key mentioned is not exactly centred, but a trifle to the right off centre. And you can see how the  Z(=Y) is easier to reach from the left than the right on the qwertZ (used as qwerty)

Can an obtuse angle be sharp?

What? Did a math-guy just ask that? Well there was a tiny detail that made this question sensible. The main surface and the ends of the back meet at an obtuse angle, but the odd thing was that it felt sharp to the hand, it felt like it could be used scraping stuff. It was easily fixed with an ordinary white piece of paper (used a random envelope with some scribbles on my desk actually) used as extreme fine sandpaper a few times. Did not take any images before (sorry), only after: 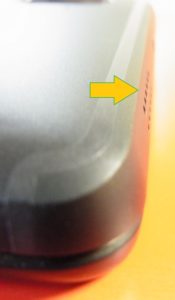 So if you experience the same on a final unit, that is the simple remedy…

The rest of the device feels smooth, all well finished to the touch. When I take a walk with the dog I tend to fondle it in the pocket, because it has a nice pebble like feeling to it…

No roses without thorns…

The back light layer of the unit Eske is using was from a small batch of samples. Production components comes with mass produced and in theory should be much better. (And I can see being better.)

Another tiny aesthetic detail is the non-smooth surface of the stickers for the new screws, that makes them stand out, rather than tone them down 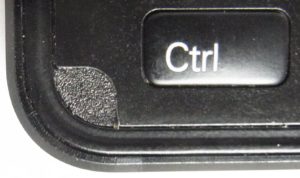 But as I said in their forum, if our complaints are down the nature of some tiny stickers, it is a good indication that they done a really good job!!

On one hand I would love the device a bit smaller so it was easier to operate as a slab one handed while keeping a good grip. But on the other hand I’m getting so old that I know I would have trouble using a smaller screen with the same resolution, but would not like to go below the FHD… And would hate to have to use a large font so I would have to scroll a lot….

I’m thrilled! Have been waiting for this for almost a decade, and the only real complaints I got is with software, so there is a good chance that they will be ironed out.

Sure there are things I would have preferred different, but it’s by far the closest available to fulfil all my wishes for a device. I really hope it is going to be a success so that a next generation in a couple of years comes in more than one variant, to get even closer.