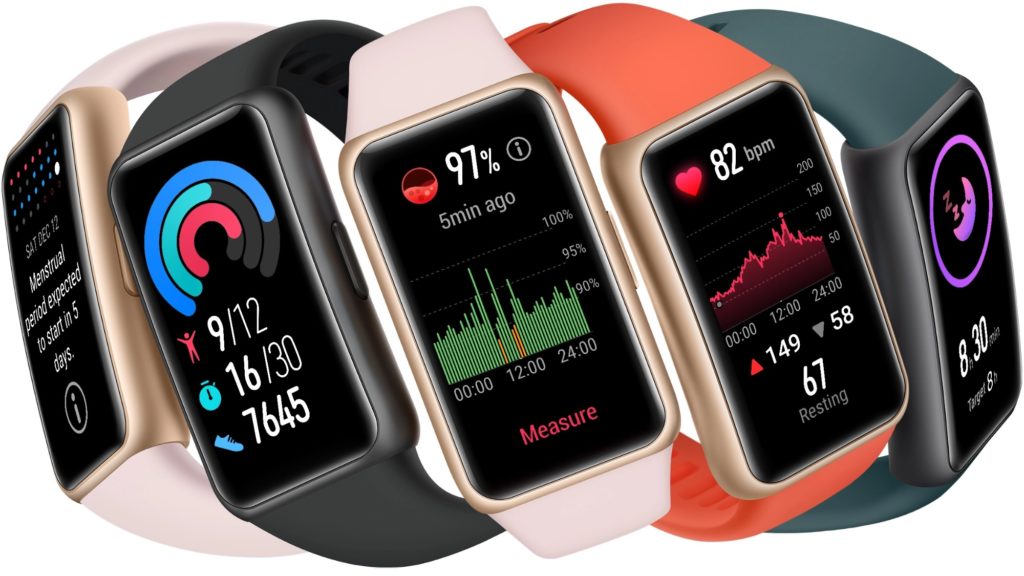 The Huawei Band 6 I got (“FRA B19”) is almost identical to the Honor band 6 (see this post) less one important addition.

As the devices are close to identical, I will only be talking the differences here, see the link above on the Honor Band 6 versus the Honor Watch ES and the Honor Band 5.
(the above image is an advertising image from Huawei)

The Honor also has a red marker on the power button.

The marker can not really be seen or felt when worn, so just stains the otherwise minimalistic design IMHO – but some might see it as a refined detail…
The bands are identical in design, except the small brand name on the strip retainer. (If you dislike this, you can twist it so the logo faces the arm)

The Huawei variant has an elegant detail, that can not even be seen when worn, that the two tiny pieces of plastic that locks the strap, are coloured in the same colour as the strap. (ignore the wrong colours of the image, as the red table confused the camera, it as actually the green variant)

AFAIK the hardware inside is the same, but I could be wrong.
The software and user interface is slightly different in (at the least) one aspect.
The SpO2 metering on the Honor has to be triggered manually. The Huawei offers also contiguous recording – obviously at the cost of some battery stamina, though it seems to be minor(/minuscule?), the total usage is about 6-7% points a day when on.
The advertised “Continuous” should be taken with a pinch of salt. It tries once every 10 minute or so, and only if you are (almost) still at that point and the display faces up (both are also requirement for manual measurements).
Here the Honor with a single manual measurement two days ago, and The Huawei with the contiguous. 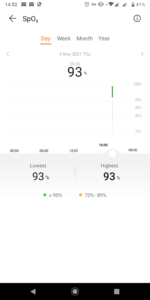 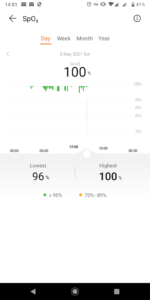 Add: May 10. looked much better with fewer holes: 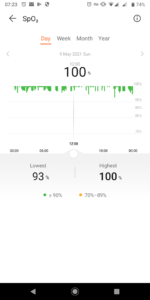 A slight detail (at the least on Android) is that this auto-function is by default OFF and has to be enabled from the app, not the Band 6! BUT the version of the app offered on the Android Market is so old (10 month), that it is not an available option!! Though it is generally not advisable to sideload apps, you can download and sideload a substantially newer version of the app from Huawei

The funny thing as that the similar app in aPple’s store offers much newer variants. So not just part of the US/China trade war. I guess it is a war on the fees for the internal app purchases the new version tries to push.
I do not know if you can pair it with an Iphone or Ibad, activate the functionality, and then unpair and pair with an Android device, and keep the function selected. I would expect it to work, but has not tried it out.

I did switch back to the official version of the app – but be careful with that if upgrading! The needed uninstall step lost me a year long tail of data, keeping only the last weeks data pulled back from the data the Huawei servers had stolen and kept, and gave back…
But apart from that things works fine on the old version after switching back. So I recommend to stay on the official app, and use an Iphone or sideload the new Android version temporarily on any old Android phone you got access to, just to activate the function…

You can now get alternative (third party) bands (working on both band 6 variants) e.g. magnetic Milanese bands, that are less elegant, but makes the band 6 much more comfortable to wear as a watch, as it is super easy to tighten or loosen as needed. But I doubt it would be good if you want to use it say playing tennis or similar. And the total weight do jump from 30g to 45g 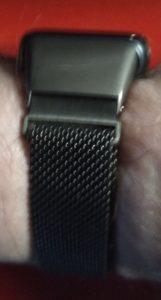 Here a (cropped) advertising image from this listing (there are other variants than their first overview image indicate….) 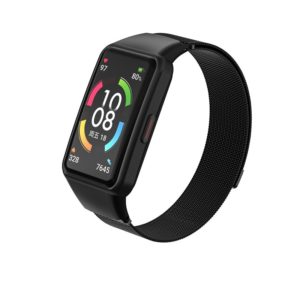