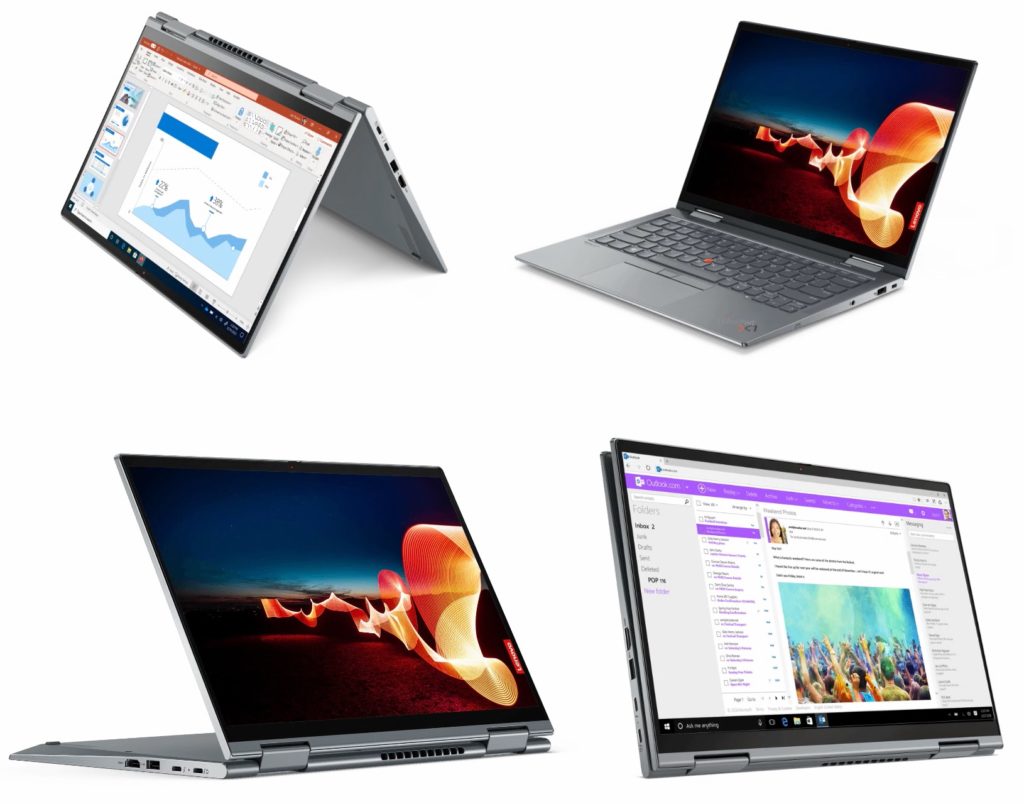 – No mechanical locking of the keyboard when in tablet mode.
– Decrease in number of ports.
– No Micro-SD slot (though it was hard to get to on the 20FQ)

Other things have been updated too like standard USB-C ThunderBolt4 over the proprietary OneLink+ docking, and more light sensitive camera with FHD (vs HD) with build in mechanical paranoia-slider.

The fingerprint reader is in a slightly more awkward position, combined with the power button near the hinge, that is only accessible when not closed. BUT if used closed with the docking it can be turned on by a button on the docking (like the old one).

There are slightly less ‘depth’ in the keys, but on the other hand a slightly more distinct ‘click’. But If I did not have them side by side, I’m not sure I would have noticed (and no it is not due to a worn keyboard, they replaced it -again- a few months ago, within the warranty I bought for it)

The 20XY (like the 20FQ) has a wedge profile, being extra thin at the front. So the reduced 2mm made it harder to have buttons and plugs at the sides, so they are only present in the rear ‘thick’ part of the lower half (see collage of advertising images above).

Like the predecessor the air-intake is at the bottom, so to let it have a more free air flow (and thus less fan noise) I have placed both on a pair of cheap plastic wedges at the rear on the table, raising the rear something like 5-10 mm. I can recommend this to anyone that dislike fan-noise.

They both weigh in at 1.4Kg. But the smaller area is almost identical to my even older 12.5″ Yoga S1 from 2013 with its 316 x 221mm. The new 20XY, not unexpected, being much thinner. The difference to the 20FQ might not seem much. But it really matters, as the S1, and thus even more so the 20XY, can slip in almost everywhere dimensioned for an A4 envelope/folder/binder/paperstack. The 20FQ was a bit on the large side for some bags.

The extra power and memory means it can do the same tasks easier, and thus with less need of firing up the fan. The old one struggled to show 4K 6oHz. This one can do it at reduced speed. I actually tested 4K 12oHz from Youtube while it was fetching and installing the upgrade for Win11…

As a new model it (obviously) asked for upgrading to Win11 during install. (the CPU are too old on the 20FQ). The differences are small, but that is a different story.

The ThinkPad  X1 Yoga Gen 6 and the ThinkPad X1 Carbon Gen 6 are close to identical, less the hinge. They even share the same service manual.

A tiny drawback is that the slanted front, makes it a bit awkward to get hold of the lower part opening, naturally trying to grip at the front.
I got some ‘grip-tape’ intended for stairs, that I used to improve the grip of a Sony RX100 III, and also on the FxTec Pro1. So I might find a strategical place for a piece to ease opening – if I get tired of using the nail between the two halves.

I really dislike that they removed the ingenious key-locking system. But I must admit that I in the five year I got it, perhaps have used it as a tablet a handful of time. So it does not matter for my usage-pattern.

The pen is also back at the size of the one for the old S1. (though technically AES and compatible with the 20FQ) I practically never use then pen either, but I do sometimes during typing use touch rather than grabbing the mouse or using the TrackPoint to select something.

The TrackPad, is one of the first thing I disable after install. For me just a nuisance and waste of weight and cost. So no need to comment more on that….

The upgrade from 16GB to 32GB was not that expensive at around £100, If I remember right. And I really look forward to this, as 16GB is easily spent with 64  bit Win 10(/11) and various stuff open, so a lot less swapping to SSD. The first two days has been a smooth usage experience (not mentioning the usually mess personalising the Windows set up).

I bought the variant with the i7-1165G7 and 1TB SSD. I was too stingy to buy neither i7-1185G7 nor 2TB also offered. (They charged an additional roughly £160 resp. £280 for these upgrades). The differences between the two CPU’s are marginal. And being a ‘standard’ M.2 SSD, I should be able to upgrade it much cheaper if/when I run out of space in a couple of years, before I want to upgrade the pc again.