I have for 4½ months been using cheap bluetooth keyboards for an Ip6, And I really hate Ios !!! (see review)

At the least two versions are available through ebay, in the price range varying between £9-16 from different vendors. 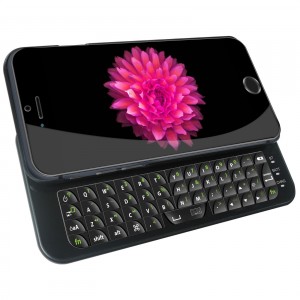 This is currently the least bad available replacement for my ancient Sony Ericsson Xperia Pro.

As similar unfortunately only exists for larger phablets, and the Ip6 is already slightly beyond what I can operate fully with one hand. No Android (or WP) solutions are available. (The BlackBerrys only come with portrait keyboards, and thus extremely small keys, or huge devices). So I had to cave in and throw money at the greedy sods of the fruit company

The total thickness of the combo is the same as the Xperia Pro, and the weight is scaled by the area, so the weight per area unit is about the same, so it does not feel much worse.

Apart from the obvious benefits of the keyboard, the poor ergonomic design of the Iphone6 (too thin edges with no friction, making it slippery as a piece of soap) is remedied as well, as you both get a better shape, and a material with better grip. So despite the added mm width, you end up with a much better and more secure grip – but yes it looks less elegant.

Of course the last part does not matter as I would never have bought an Iphone, had an alternative existed for e.g. the Sony Z3Compact (Z4C?) or the Samsung Alpha.

An additional benefit is that it camouflages the embarrassing fact that the phone is an Iphone. As people generally do not know the above whys, they could otherwise assume that I was yet another fashion fool falling for “The Emperors new Clothes” aka The reality distortion field. 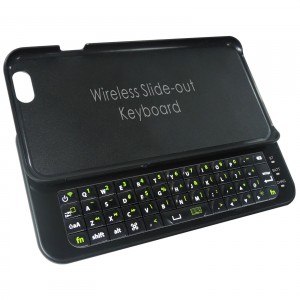 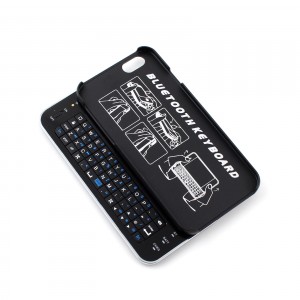 Both exists in white and black

The one I prefer is the first one, with some curvature shapes on the keys, making it much easier to not get the wrong/neighbouring key.

The other have the advantage of an on/off switch, but unfortunately also have a a single press screen lock key, that REALLY is a pest!!!. and an ugly chrome frame. It is also slightly thicker, and slightly noisier to the click.

Both have white backlight, and additional functions printed in green respectively blue, giving it a slightly different appearance.

The rest is common:

The backlight is a really nice thing, but there seems to be no way to tell it to always turn the backlight on during activity.
It turns temporarily off after a short whiles inactivity, but if you within an unknown number of minutes begins typing again, it remembers that you want backlight on. When inactive for a longer period you have to turn it back on explicitly.

The main letters are easily seen without backlight in most conditions, but as well the blue as the green is hard to see. Slightly easier on the white than the black. (Yes bought all four variations)

The slider is passive, that is pure mechanical, with no interaction with the keyboard/phone. A screen lock on slider-close would have been a nice option.
And it would have been clever if the keyboard was simply turned on/off by the slider, but that might have added some communicative issues.

After upgrade to Ios 8.3 it works slightly worse, as Ios 8.3 tends to drop Bluetooth connections randomly and/or not resume correctly after Aeroplane-mode (That I use in Cinemas, as it is faster than on/off). This specific bug was not there in earlier Ios 8.x, so we can hope it gets fixed in 8.4.
UPDATE: The issues is still there after several updates (currently 9.2), but it is far better than 8.3, so they have at the least tried to fix the mess they made.

But it could be a deliberate deterioration to make other BT devices than their own overpriced Iwatch to work poorer? I would not be surprised…

Apart from what is printed on the keyboard, a lot of additional combinations are offered including Copy&Paste functions . It support CTRL+ A/C/V and marking with SHIFT and or CTRL+arrows. VERY handy and MUCH easier than marking text with a finger!!!!

Some programs even supports Ctrl+Z undo.

Here are the main key combinations for the US layout. The Normal (well caps) and Fn are printed on the key-tops. 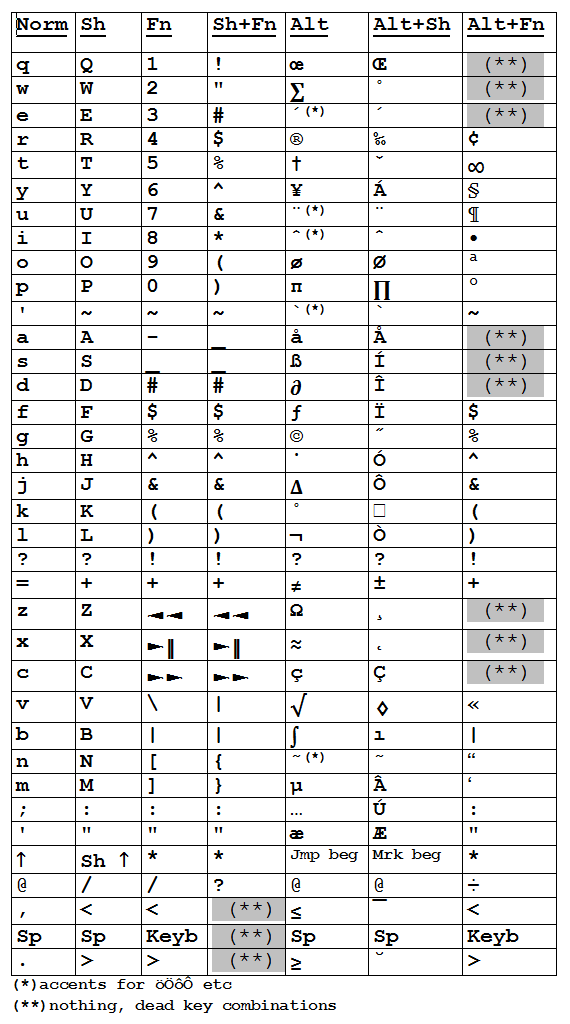 Plus Enter, Backspace, the other arrows and On/Off. The above is for the one with curved keys. There are tiny variations on the other one.

Other languages layout can be selected inside the Iphone, but then the print on the key tops would (of course) be more or less wrong.

ADD with Ios 9 they have added a new crazy bug/feature in Messaging so Enter no longer gives a new line, but sends the message, With Ios 9 you need to use Alt+Enter as a workaround
For more on Ios 9 see this

Up until Ios 8.4.1 the Ctrl+Space gave keyboard-layout selection. That function has unfortunately been removed in Ios 9. This is rather annoying, as I do not use the same layout for The hardware and software keyboard (US-English for hardware and Swype for software). So I have to remember on the firmware keyboard to change the layout back after use on the virtual keyboard…

Pairing is quite easy: Turn on the keyboard, Start Bluetooth broadcast, on the phone start Bluetooth, select the device, enter the four digit code shown and Enter. Done!

The settings menu, as well as so much else in the Ios lacks support of landscape. But most third party apps of a decent quality supports both landscape and portrait.

The (quite poor) build in messaging app, at the least supports landscape.

The stamina is so long that I have not yet experienced it to drain.

It is powered by a standard Micro USB plug (hello fruit company, heard of the word “standard”?) 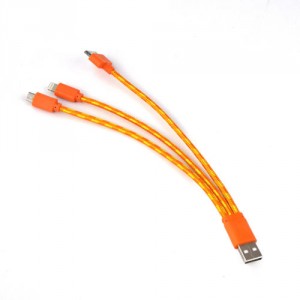 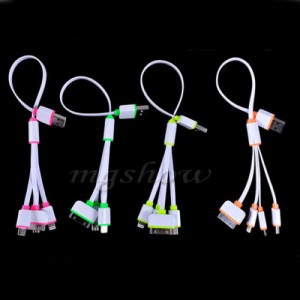 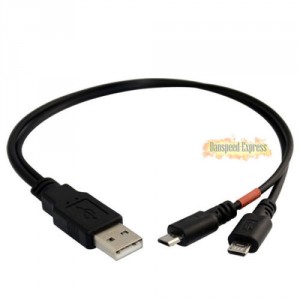 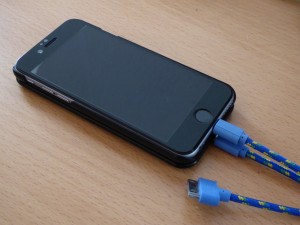 or a Micro-usb split cable and a tiny lIghtening adapter on the cable.

As the Iphone drains many times faster (and charges slower) than the keyboard, if you only occasionally remember to charge the keyboard, you are fine.

The mechanical quality of the sliders and keys are surprisingly good for the price, but the electronics quality is not!

I have had three refunded this far(!), And estimate that the mean life time is around two months, so I bought a stack…

Two of the refunded I have actually been able to resurrect, by opening and shortly short-circuit the battery(!).
Unfortunately there are no reset switch, or other nice way to do it, and the battery is soldered to the wires, and the wires soldered to the print. At that price and at that size/weight, I guess a plug would be to much to wish for.

I have tried various Bluetooth keyboards intended for (too large) Android devices on Iphone 5 and 6 and they work just fine.

But unfortunately not the other way round… I have bought two different types for Iphone 6, and three different types for Iphone 5, before I bought an Iphone. NONE of them works with android phones. They connect just fine, including entering the security-key-code, but nothing happens when pressing any key afterwards.
I had hoped that I could have used one of them with something like e.g. the Sony Z3Compact (Z4C?) or the Samsung Alpha.

So for now I’m stuck with the horrible Ios 8.x  There is a tiny chance that Ios 9.x, would remedy some of the worst issues – but the hope is ever so faint….

See also my review on the Iphone 6