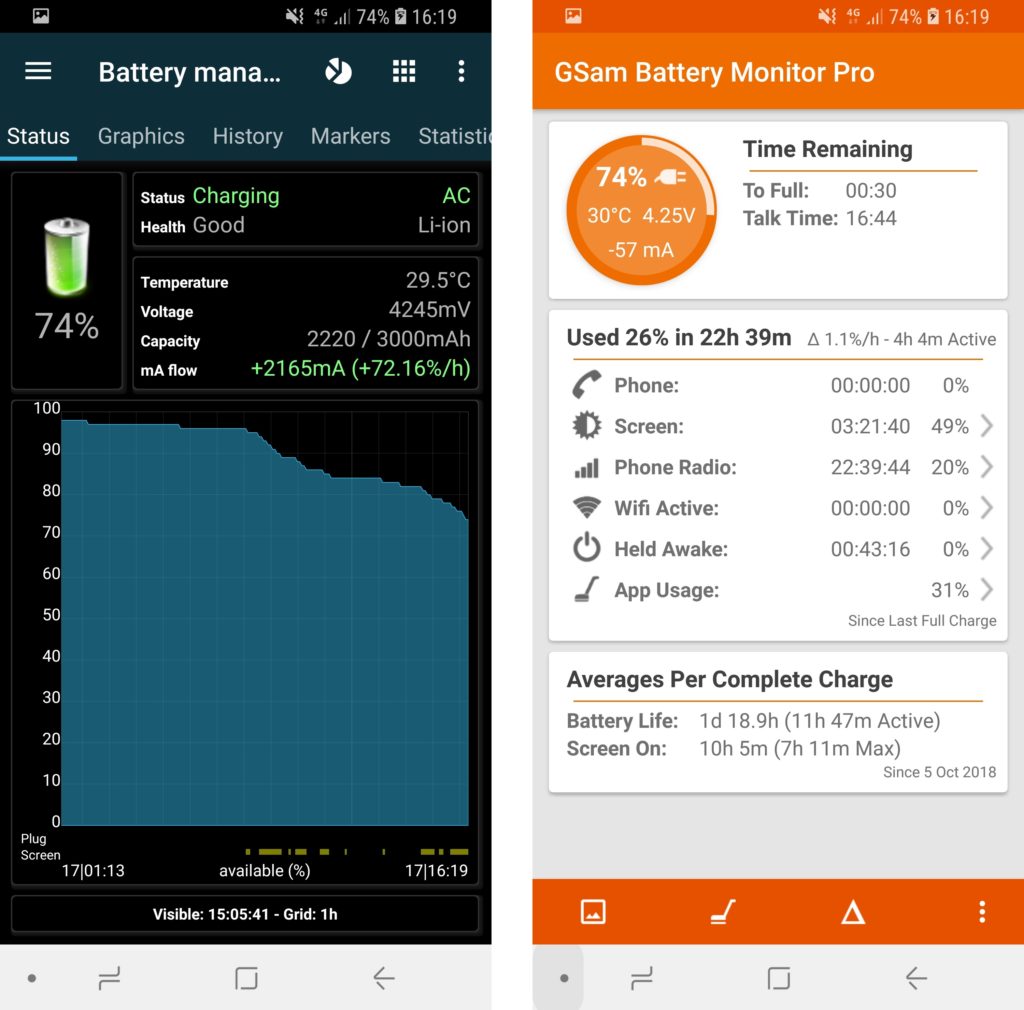 Both are GREAT apps in helping you finding out what is going on and especially what eats your device’s battery.

There is a bit confusion [*] on the naming on the 3C one, as it offered as a stand alone

“Battery Manager” as a part of the larger “3C Toolbox“

This Toolbox not the least also contains the “Process Monitor”/”Task Manager”.

And until a few hours ago I thought that 3C could not do quite what GSAM could without root. I was wrong….

If you find this or this post on the 3c site, you will see that executing the following command does wonders (on adb see also this)

But did not know that the similar worked for the 3C Battery Monitor too!

If you are using the ‘free’ versions, the similar commands are

And this is reasonable similar to what I get from GSAM

Both offer even more detailed info on a specific entry:

3C Battery Monitor is generally more lean on the battery than GSAM, but none of them are heavy on it. That they appear as prominent users above is due to me playing with the 3C Toolbox a lot, and would not be so in normal usage. See e.g. this from my BB Priv where 3C had used 0.1% and GSAM 1.0% of the capacity over an almost eight day period.

Note that in 3C “On Battery” is the total since FULLY charged in contrast to “Since charged” that means “Since LAST charge“. Rather confusing IMHO.
Similar on GSAM “Since last unplugged” is (of course) not only physically plugged, but goes for wireless charge as well.

I’m not sure how either of them includes or excludes what happened during any intermediate partial charges. This could make a huge difference if e.g. used with a slow 500mA car charger while doing sat-nav with the display on, as it might be using about as much as the charger can provide, and thus not reach the fully charged state.

(I would strongly discourage anyone from using a device this way in normal usage, as heavy usage means heat, and heat during charging or discharging is bad for the overall battery life, so better to charge the phone fully before you go, so the battery is inactive while the device is being powered by the car charger for doing the heavy job, see also this)

Both display the total usage in the period. Do not get confused if you see a number over 100%, if you have requested since last full charge, and the device have been partially charged in the mean time. As it is the sum of the usage in each period between the charges.

In GSAM they also display a mean usage rate. This can be quite handy as a measure of how lean&hard the device has been used.

I like the many graphs and options on 3C the most. And the developer has a very high service level!

On the other hand GSAM is a little simpler to use and offers detailed info on the quality of the cellular signal in the period. Quite useful to find a good place/orientation to put your phone overnight.

For more on batteries see other posts in the category.

[*] Back in time it was also known as BMW for Battery Monitor Widget. But for obvious reasons that have been changed .