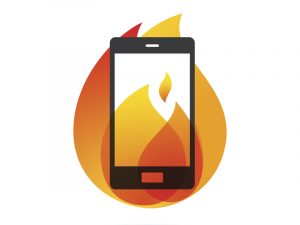 I have written several posts regarding batteries directly and indirectly, especially this old one.

But here I tried to summarise and update it.

Batteries do not like heat! If a battery is operated while hot, it shortens the overall battery life!!

And as almost all phones/phablets in 2018 comes with planned obsolescence and non (user-) removable batteries, it becomes increasingly important to reduce the heating especially during charging, as simple habits can help.

Hint no 1: Preferably charge you device while it is cold and idle – e.g. while you sleep.

Charging in it self heats the battery, so slow charging is better than fast charging for the overall life.

Unless there are some electrical fault in the unit, it gets hot only when the battery charges/discharges and/or the chipset is doing ‘something’!

This ‘something’ could either be something demanding it has been requested to do by the user, e.g. gps navigation or a game.
BUT it could often be something the user have not directly requested, or even are unaware of is going on. This is NOT limited to apps stealing data and sending them to USA and/or China. But could be ‘anything’ that requires the chipset to work.

Hint no 2: If in doubt install an app like GSAM or 3c Battery Monitor to find out what is going on, and who is actually the culprits using the battery.

It can even be pre-installed (bloat) apps, so it is by far always the users own fault. When you found the culprit(s) you can either remove/disable them, or if there are no good alternatives, try to tinker with the settings, and see if it help it to behave. Sometimes removing permissions it should not really have had in the first place, can maim it in doing its bad business….. (On an Android under Settings, Apps, find the app, Open, and see Permissions)

Remember that free apps often download and displays ads – this is in the ‘something’ category, that could eat more of the battery than you might think! In 2012 an investigation found that it could be even 75%!!!

Hint no 3: If you use any free apps a lot, it might be a very good idea for the device/battery to buy an ad-free variant.

Remember that both charging and discharging even an idle device, heats up the battery, and hence the device.

Hint no 4: Avoid doing heavy jobs on the device while charging it.

If you know it is going to do a demanding task (say a few hours of sat nav) then charge the device before you leave AND use it plugged in while driving, this way the device may heat BUT the battery is ‘inactive’ as it is neither charging or discharging in this heated state.

Wireless chargers are at first a very convenient offer, BUT most people tend to ignore that perhaps half the incoming power is wasted as heat.
The rather innocent parts of this is that it prolongs the charging time, and that it is a waste of energy and money, but the far from innocent part of this is that batteries get their overall life span shortened if they are warm when charging, and this is exactly what is happening when the device is placed on a heat source like the wasted energy from wireless charging..

Hint no 5: So IF you want to use wireless charging, on a non removable battery then I’d recommend to use a simple lo current charger (say less than 1A / 5W)

Note that on larger systems like electric cars, there are much better efficiencies. See e.g. here.

On most devices it is very easy to enter/exit Aeroplane mode. And as this as standard turn off all sending and receiving circuitry, it usually turns the standby power needed down to practically zero. So this can be a good alternative to ‘muting’, and is both easier, faster and more power efficient than turning the device off and back on.

Hint no 6: Use Aeroplane mode, rather than Mute or power off/on

Searching for connection can be very costly, a simple travel by car/bus/train a few hours, can give a substantially dent in the remaining capacity, as it hunts for connection. And if WiFi is on, it does a lot of scanning too – even if it not set to connect to random insecure networks.

So if you are not going to react to incoming sms/calls anyway, then save the battery and use aeroplane mode. (Perhaps set an alarm around your ETA, so you remember to turn off aeroplane mode)

The big elephant in the room….

No matter the display technology, you should not be surprised to find a normal phone/phablet eating about 1/10 of the battery capacity per hour, even on the most trivial tasks like reading a pdf or playing Sudoku.
Reducing the brightness to no more than actually needed can help, but it is not the brightness only.

Sure it is cumbersome to change habits, but here they can substantially ease daily issues.

I got a BB Priv, and many of its (few) users complains on it heating, and the lacking stamina, and some on short battery life.
But with simple habits I see NONE of this, and actually had almost eight days of stamina with no trickery and the original build in two year old battery – though it were days of light usage.