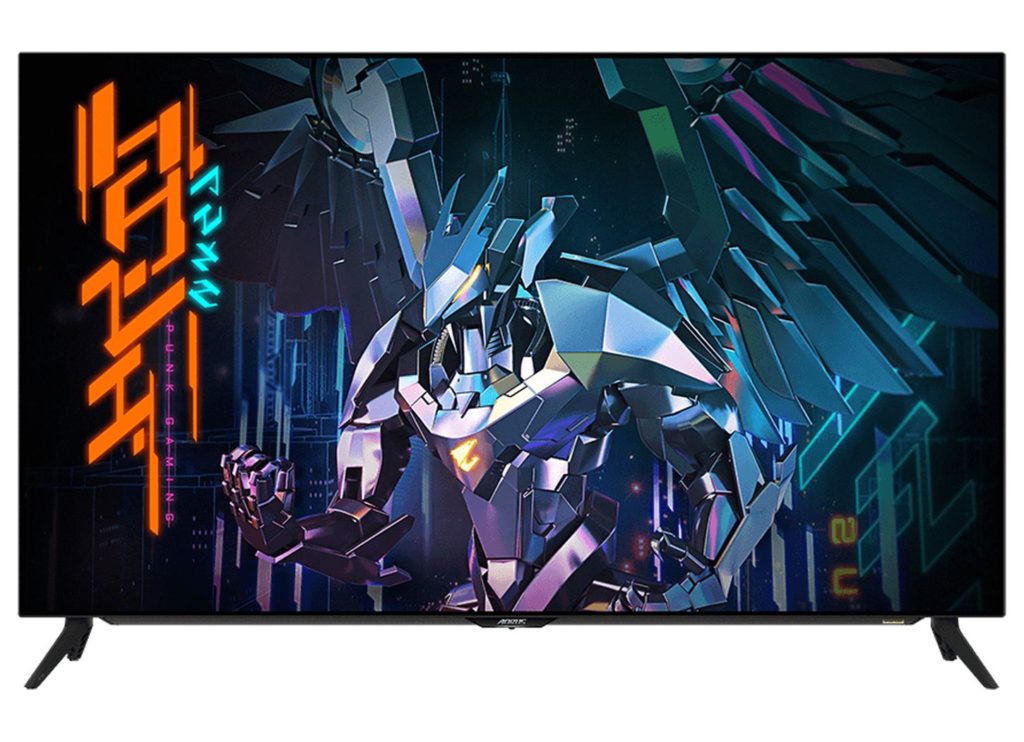 The first impression on the upgrade from the 42.51″ Philips BDM4350UC (see here), is that compared the old seems like crap!!

The image is SO much better on the FO48U OLED. Especially when showing image contents. But also off centre content, that is viewing the display at an angle.

There is a 11.8% difference in measurements (25% in area). (here advertising images scaled and put side by side, click for full size 1pixel=1mm)

The size difference oddly feels less than it is, and it is not merely due to the the bezels on the FO58U being less and smoother too. I guess it is psychological, they are simply both huge.

It is easy to find rather comprehensive reviews out there, e.g. this or this. So this is my personal experiences only, not in anyway a thorough analysis of the product.

It is describing the differences to my previous BDM4350UC and my personal experiences this far.

The FO48U is OLED that offers real black, that IPS can not deliver AND it has better viewing angles. So despite being wider and placed at the same about 75cm (and thus 100cm to far corner), as the BDM4350UC was, I see substantially less distortion and blur towards the edge/corners. There is still a slight colour distortion, but less, and the image stays sharp, text can be read in the far corners!

Despite I’ve seen people complain on reflections, I see weaker/less reflections in the FO48U than I did with the BDM4350UC – that was a pleasant surprise!

BUT the FO48U has its fault too. The worst things are software:

It has some strange auto-mechanism that adjusts the overall brightness level down when the total image displayed is bright.

As described later I updated the Firmware F04 to F06, and this certainly helped a lot on the second issue below. So anyone should definitely do update the firmware as one of the first things! – and as the update messes with your settings it is better done early.

If you have a small white (or just bright) window on a black/dark background, and maximises the window, it will show a MUCH less bright colour. And it is NOT a matter of the display incapable of producing the brightness, as it shows the same behaviour if the brightness is turned down from its 100% to e.g. 5% (Around 15% seems like suitable standard brightness for me BTW). I think this crazy detail is intended for gamers (the FO48U is clearly gamer-oriented) so a small white thing stands out in dark surroundings, without blowing you away when showing an all bright image. But rather annoying for desktop usage, so strange they have not added a way to turn the feature on/off. At the least allow it when the brightness level is selected below a certain level, as I could understand if they had an issue with all LEDs at full power at the same time for a longer period.

Similarly the brightness is reduced gradually over time if the image content is ‘constant’, starting after a few seconds. This is REALLY a pest in desktop mode while reading or entering text (like this), where it sees the changes as insubstantial! ADD mainly F04 Issue

I HOPE both are just a matter of software settings I have not yet found, or is an update away!!!

It is not that it has a huge power consumption (Despite labelled as class G) , at the brightness level I choose it’s around 40-45W, where the BDM4350UC was around 32W. So sure higher, but not high. I mean If I used it 12 hours a day all year, it would be less than 200KWh – not anything that will ruin me, even with current prices….

Yes Yes I know OLED is prone to burn-in, but if the display is kept at a low brightness…

This OLED is not an RGB array but a WRGB, that is from top to bottom White, Red, Green, Blue. People are not generally aware that diodes are layered, but this is quite common
I have been too lazy to redo this drawing, but the same principle just with a white layer under the three others:

It is quite hard to get the display to use a profile with same brightness on all four LEDs showing ‘white’, but selecting slightly different colour profiles the pixel arrangement can be seen. Each 0.274mm square pixel is divided in four bar-like LEDS, in horizontal band, W,R,G,B seen from right to left. Here a few crops. 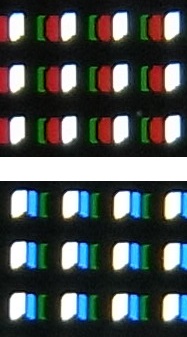 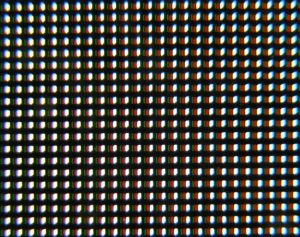 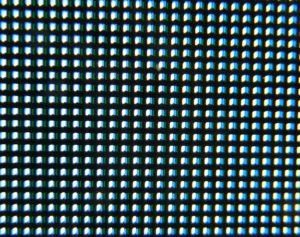 Note that vertically there is surprisingly much space between the horizontal rows, roughly 50%

I found a silly workaround for the second issue: Have a small window with something changing somewhere on the screen…. I first tried a tiny window streaming some roughly 376×280 TV content. And it worked like a charm. 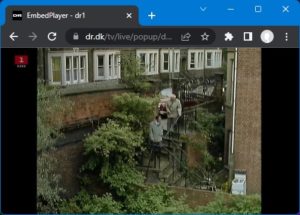 I then made a small idiotic windows form program in a small moving ‘window’….
But firmware F06 improved things substantially here, Even moving the mouse can now (sometimes) be enough to wake the monitor from the ‘dull’-mode to the user selected brightness… And even though the monitor is large, it is not very likely that you need to read on a totally unchanged image, without scrolling or moving the mouse at all, so though not solved definitely better than F04

I currently use this small windows form app. The coordinates are hard coded (L12) to the coordinates I use, with the FO48U centred above a primary FHD display.
A small bar of 0-31 pixel rolling in from the top (0-1.4%), changing from black to white. Clicking it makes it go away for a few seconds so I can better access any top bar under it…
I’m sure you could get the same effect with courser steps and higher delays, but any system able to work smoothly with a 4K display would hardly even notice this small app (working in idle class)

The FO48U has a rather strange “Panel protection mode” that it requests you to activate.
It basically turns the display off for about 5 minutes, blinking the led under the display, and when the blinking is finished you can turn the display back on again.
I have no idea if anything other than letting the LEDs rest is going on in this period.
It ‘logically’ stays on during the process, so Windows do not try to rearrange stuff – but you (obviously) can not see the image, so a forced minor break, unless you move your work to another display.

There is a nice guide here (Sorry not real guide, only video). Currently offered downloads, including firmware in various languages can be found here – a slightly chaotic place, with TWO versions called F06. With and without the need to install the OSD-setup program first (I believe). The newest only, can be found here.

However the FO48U on F04 reacts slightly different on firmware upgrades than the guide. No upgrade option WITHIN the OSD-software. BUT the (currently) available F06 is a zipped EXE, and unpacking and running that installs the firmware. DO NOT attempt to use the OSD-app during the update. (I did, and it returned an error message reading the version and showed it as F00) After the update, and settings things again (it completely messes up Window’s monitor positions, scales, extension and primary monitor settings – and your settings on the monitor!!!), everything seem to work fine, and the OSD-app shows F06, when entering About again. Strangely I have not found that info in the monitors own OSD-menus

The settings in the OSDsetup app does NOT match 1:1 what the OSD settings offer, though it does affect the same things. This is pretty confusing! So I think you better settle for using one or the other. The best that can be said about the app, is that you can save your settings.

What is even worse, once you close the OSDsetup, it have not been able to  reopen it on win11??? You can uninstall and reinstall it though….

For now I will limit myself to these first comments, but like always, I bet it will be modified along the way.
Here a few images based on official images from their site: 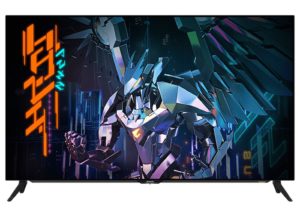 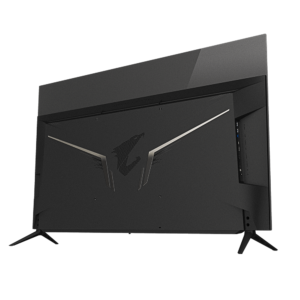 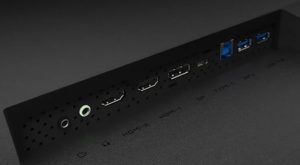 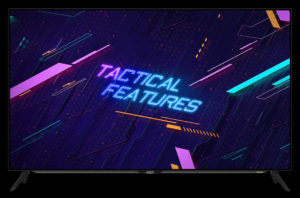