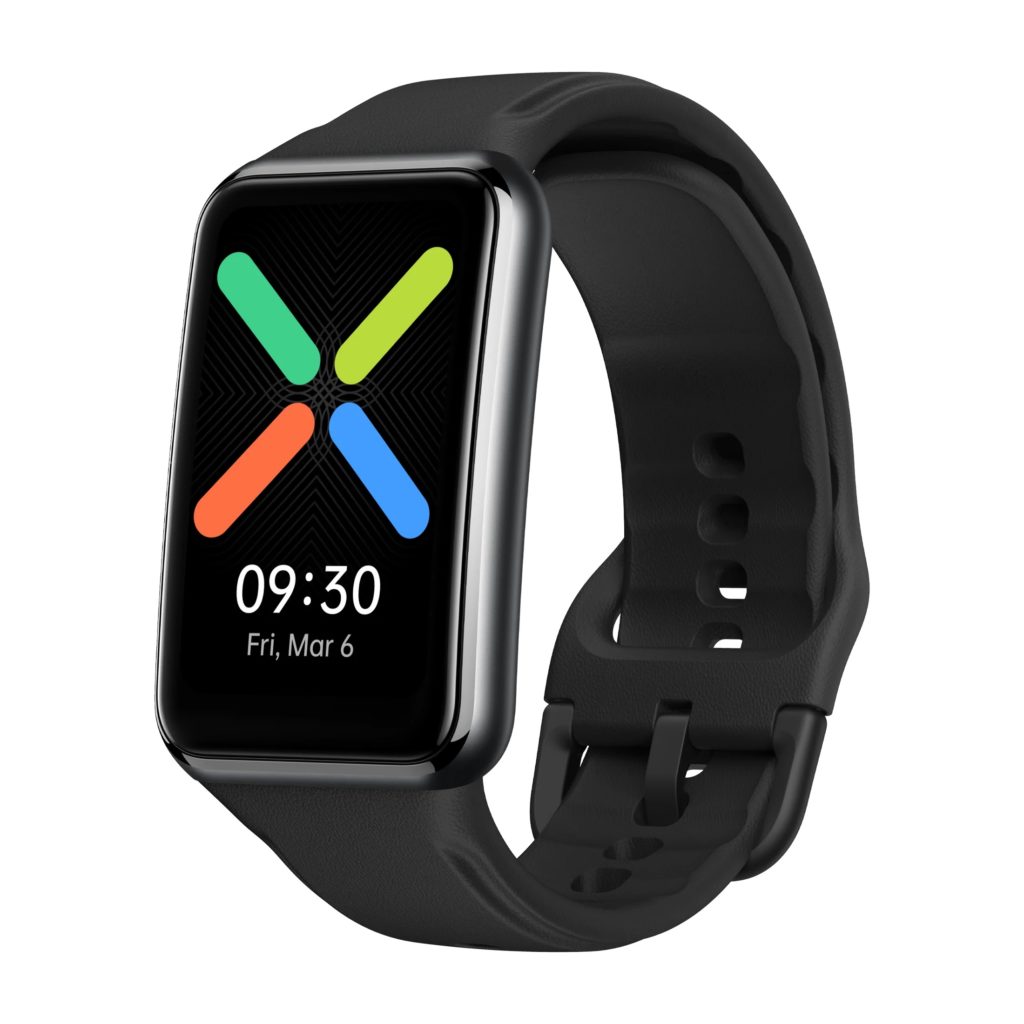 Just a few weeks ago I bought the Xiaomi Smart Band 7 Pro (see this), but was less than impressed. And just recently became aware of the cheaper and half a year older Oppo Watch Free, with a better physical design.

I will call them XB and OWF for short below, and call the Huawei Band 7(/6) also mentioned as HB7(/HB6).

Dimension-wise the OWF and XB are really close, and the HBs smaller

As with the numbers above the OWF is spec-wise very close to the later XB less the GPS and Alexa (Good riddance!), and slightly cheaper. BUT the big difference is in the (in lack of a better word) Wearability, The OWF is much better shaped suitable for human wearing! Rounded and less pill-box-on-a-string. Though with 1mm larger footprint. In my eyes the OWF is also less ugly, only adding to the pros. Click the images to enlarge.

Next a collage of two images for Milanese bands from ebay for the two:

Notice especially how the band of the OWF goes much more smoothly into the display surface than the XB, and the more smooth transition from the display into the cases in general (In that aspect quite similar to the HB7) – as the display is the same size, this comes at the ‘cost’ of a slightly larger footprint.

The OWF attach-arms, goes a mere 0.4mm deeper than the sensor protrusion, so with no band attachments they are almost at level. The XB goes much further down.

….And YES the XB glossy top frame is very prone to fingerprints – forgot to wipe, sorry. Not anything important though.

The flip side of the OWF band-attachments being higher up versus the XP mount closer to the underside, is that the OWF with a metal band will fit a small arm slightly worse than the XB – on the other hand the OWF will work with a wider range of arm sizes . And if rubber bands are used, the OWF is a better fit for smaller arms. For smaller arms I will recommend considering the HB6 for Android or HB7 for Ios anyway.

I suspect the OWF and XB displays actually are completely identical, even the curvature of the cover glass seems the same as can be seen in the images above.

The batteries are so close that any differences in software optimization and chips used are likely to be more important.

Apart from the larger display (with the pros and cons of that), another difference is that the OWF (like the XB) got an ambient light sensor that the HB7/6 lacks. So nice to not have to select a dark watchface, or take/turn the watch off when wearing in say a cinema!

I have passed on the HB7, but look at the XB vs HB7 posts here. for compares.
The design language is quite similar, though the HB7 has a more clever design with the band attachments going into the house, despite being more compact. (Here some advertising images) 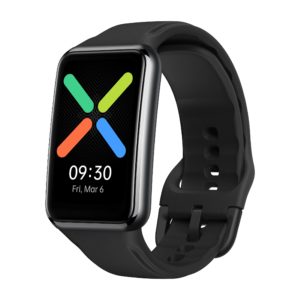 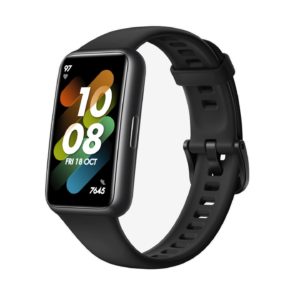 But the general design idea of both devices is the same: Rounded shapes, and smooth band-case-display transition, suited for a wristwatch  supposed to actually be worn on the wrist in daily life(!!!), which is in opposition to (AFAIK) all other b(r)ands out there….
(The XB is certainly not the worst out there design-wise, but substantially worse design than both the HB7 and OWF! in this aspect)

The 22% lesser battery of the HB7, matches the 26% lesser display. The ambient light sensor might get in play here reducing the power needed for the OWF (and XB) in similar lightning conditions. Obviously it is also a matter of chips and software how the actually stamina will be. But both can be expected to easily last a week, and closing two are not unrealistic either.

The OWF silicone(?) band is 3mm thick and 19.5mm wide. I’m planning to use the OWF with a different and hoppefully lesser band, but I like that the standard band of the OWF got rid of the retainer by storing the excess end under the other half (similar to what Iwatch is using) – at the price of a more bulgy buckle. (Images from here) 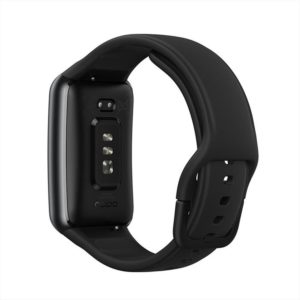 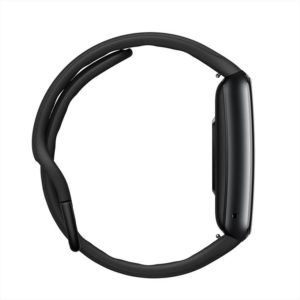 Obvious other alternatives would be the Huawei Watch Fit or Huawei Watch Fit New or perhaps the wider  Huawei wath Fit 2 though the last are not properly supported on Android (Like the HB7 requires insecure side-loading bypassing Google’s security checks). AFAIK is’s supported on Ios though. The original had a slightly curved screen, it has become almost flat on the v2 – an important step backwards IMHO. So I would go for the original one over v2. I had the Honor Watch ES, but gave it up as being too big, but at this is really close to the Huawei Watch Fit, I may have done almost a full circle here…

I would WISH someone took up the design from the now ancient 2005 Pebble Time Round, here an image originally from pebble via here 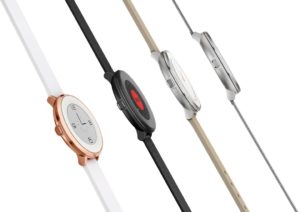 Obviously the display-bezel is ridiculous in 2022, but the 7.5mm thick 38.4mm round case actually made it watch-sized and decent looking!

At first glance you might think that it is bad that the small protrusion is sticking out more on the OWF than the XB and HB7/6. But this is not an advertising thing to get smaller numbers (unlike several other brands Oppo does not try to hide the true thickness, but clearly states both with and without protrusion).
That it protrudes more actually secures a better skin-sensor contact without the whole back of the case needing to be mounted as tight. So similar to e.g. the Iwatch they use that the sensors are the deepest point by a substantial protrusion. The edges of the protrusion could have had a softer inclination though, making the mark less visible when you take of the device, but even on my old no longer elastic skin, the mark is gone in minutes.

Oppo offers an official app “HeyTap Health”. At first glance it lands between what it offered for the XB and the HB6.

There are 43 watchfaces offered online. They have reserved space for seven watchfaces on the watch. If you uninstall one of the pre-installed to make room – it is just gone, the pre-installed are not available for re-loading?? I guess a factory reset is likely to bring them back, but seems like a strange bug.

Among the mere 43 offered I found very few that are tolerable, and a single one that I might use. You CAN select plain hands (always white) on either a photo or some ‘art’ you can do yourself. They also got some “AI”-things that really seems useless, and certainly more dumb than intelligent.

Hint: If you in the ‘art’ touch very briefly at the center you get a small dot, that is hidden by the hands, and that way you CAN get a minimalistic watchface with black background.

A nice image on how the band-attachment works taken from here. 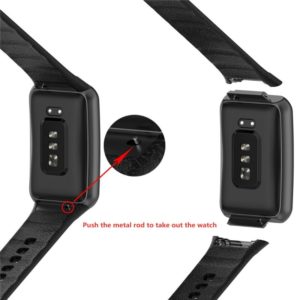 In the setting you can enable&disable double tap to wake. It is always on, no matter what you select. (with no buttons it would be unwise to disable in general, as you can select that lift to wake is disabled while you are sleeping)

A more annoying bug: When you wake the device by either double-tap or raise-to-wake, it shows the previous time, briefly, before ‘repainting’ with the current time.
So if you lift the watch for a quick glance only you can get the wrong time!! This seems to not hit the digital watchfaces though (or at the least very briefly). Digital watchfaces was a new smart thing in the 1970ies – I have moved on since that….

If you use Raise-to-wake, and turn the wrist back after glancing the time, it turns the display back off immediately, rather than waiting for the selected time out.

They also added a small delay after you raise the arm before they turn it on.

So in combination if you (for whatever reason) quickly turn your arm forth and back, even several times, it only wakes up if it ends in the face-up position.

Personally I prefer to wear a watch on the left arm, and when I cross my arms, my left wrist happens to be under the right arm. But with the OWF relying on touch to be woken (for obvious reasons with no button), this means that almost every time I cross my arms, it reacts, e.g. changing the watchface…

On their page here they on the battery consumption writes:
“14 days for typical usage scenarios, 10 days for moderate usage scenarios, 5 days if used continuous blood oxygen monitoring is on;”
and
“Real-time SpO₂ Monitoring”
But well it does not seem to offer that… Only during sleep!
the above “Real-time SpO₂ Monitoring” is mentioned in a section on sleep quality though.

I have to go back to my Huawei Band 5, for SpO₂ measurements being something that needed manual triggering during day-time.

It is not a feature I will miss as such, but it makes the band behind the original “Huawei Band Fit” from 2020.

If your arm is over about 18cm in circumference, then the Oppo Watch free is physically the best that we can currently get!! Truly wearable,.

If you need it to have daytime SpO2 monitoring, its own GPS and/or Alexa you can consider the XB, with its inferior wearability. Notice that it will fit poorly on a much larger arm.

If your arm requires something smaller go for the HB7 if you are in the aPple universe or the HB6 if you are an Android user. (If you are less paranoid than me, you can use the HB7 on Android too)