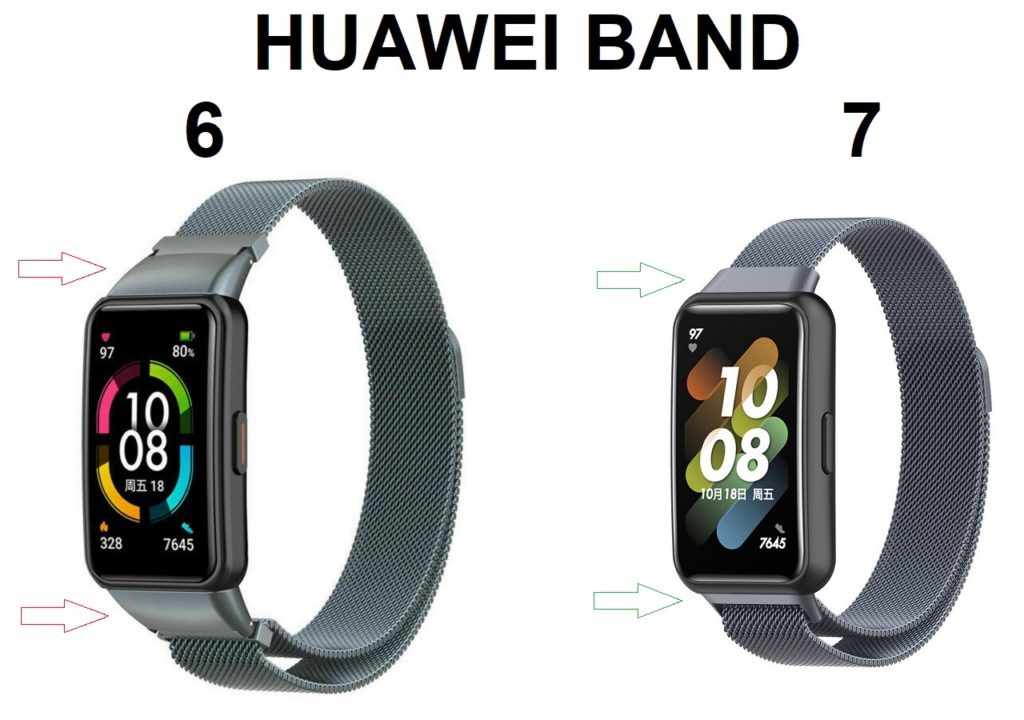 The main difference is a better band-attachment. But there is a dragon … (unless on Ios)

I’m only here comparing the two almost identical bands, for more on the Band 6 start e.g here.
For a more traditional review of the Band 7 see e.g. this from gsmarena.

The only functional difference is that they added a new software option for Always-On-Display on the Band 7, with a few fixed faces to choose from. And they dropped the “Smart alarm” feature. (An alarm is attempted fired three times with 10 min intervals, the first two are only fired if you are NOT in “deep sleep”)
They could almost certainly have added the AOD to the Band 6 too as a software update, if they did not want to use it as a reason for upgrading….
The OS of the Band 7 is “Harmony OS 2.0.0.26” the Band 6 currently uses “Lite OS” version “1.1.5.8”

The cases are also almost identical at first glance, with the Band 7 being a fraction of a millimetre thinner and wider (more rounded edges), and ever so slightly less curved display.
The band attachment is where the biggest change is, especially interesting for narrow arms, or for those using metal straps, as the new gives a much more compact connection between the band and watch case! (and thus also a better fit on the arm)

Here a collage of some factory-images from various band-sellers on ebay, scaled to comparable display sizes (click to enlarge) 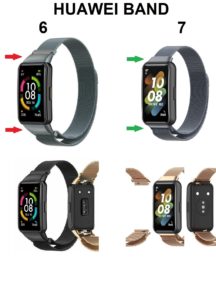 The housing of the Band 6, got two protruding hooks at each end, on which the band is clicked – a very proprietary solution, that gives bulky attachments. Though if used with the official ‘rubber’ bands, the difference is small, except for very small wrists.
The Band 7 has a slightly longer case (0.3mm) BUT, the bands go 3.3mm into the case from each end, and uses an (almost) standard 16mm attachment with a spring pin.
So should pose no problem to attach a thin standard 16mm leather strap. (It might be a bit cumbersome to remove it though) 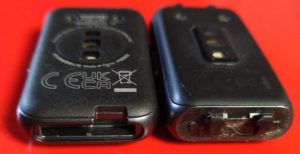 A closer side-view of the piece of the supplied band going into the case of  the Band 7. 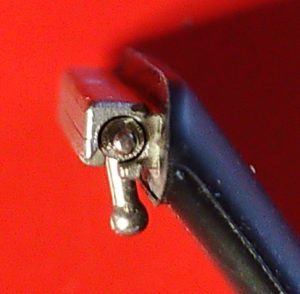 And the hooks of the Band 6

Note that the curvature of the Band 7 screen is slightly less (and thus less following the anatomical shape). The difference is small though.
(Both got flat backs, less the protrusions)

Here some more photos of the two side by side 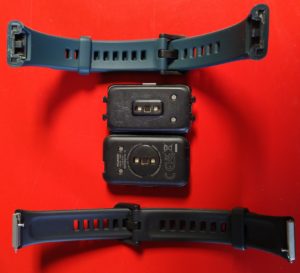 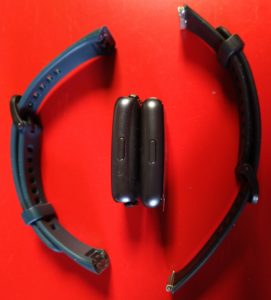 (The blueish band for the Band 6 is actually a dark green, but the red background messes with the cameras colour-profiles)

I got the Milanese band in the mail also, it adds 12g compared with the weight when using the standard silicone band.
But the simpler attachments make the result 10% lighter. 39 g for Band 7 versus 43 g for Band 6.

Here some real life images taken with a Pro1 in the left hand, and both Bands on my right arm (with some awkward twists) 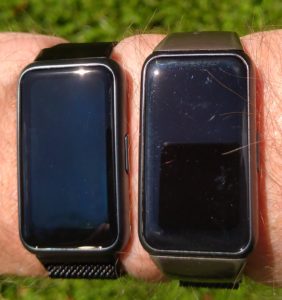 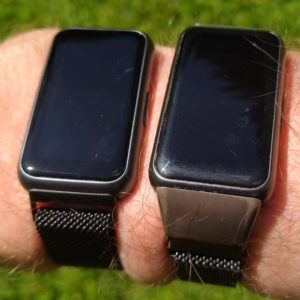 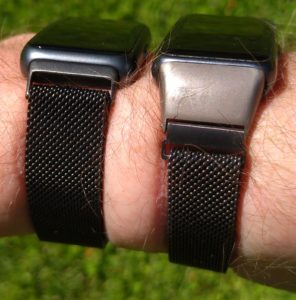 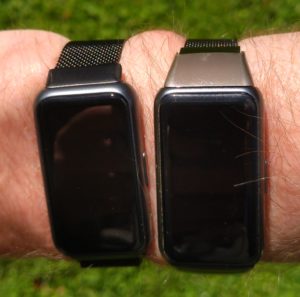 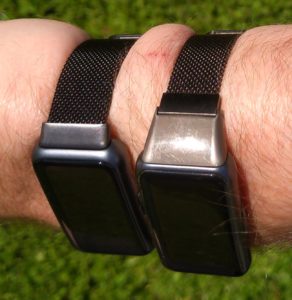 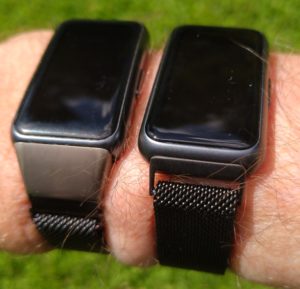 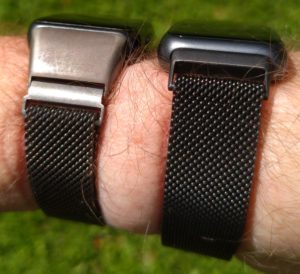 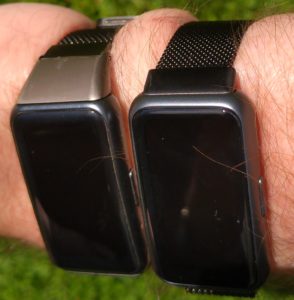 Note that the Band 7 also gets a better fit. So when it sits higher up the arm the glass of the two are almost aligned, and when swapped the Band 6 seems much thicker. It is not due to the Band-cases as such, but the attachment mechanism, allowing the Band 7 to get a snugger fit.

Here lies the dragon… for Android.

The official app Huawei Health is available in the official Android market.
It connects and works fine with the Band 6 (less one initial setting).
However it does not support the Band 7 at all!!! If I scan for a Band 6 it sees both, but fails to pair the Band 7.
The app offers a security-wise very ugly option of downloading a newer version of Huawei Hell directly from China for sideloading with NO check or scan by Google so about as bad security-wise as it gets!!! But I took the chance installing it on a test-device, and it technically worked, supporting the band 7. One reason why this version is not in the Android market is that it tries to sell stuff, for which Google would almost certainly require a share if an official app… So to bypass Google’s greed Huawei gets access to your phone… And considering that many western countries won’t even allow Huawei components in their network, this seems unwise…

They DO some fetching of supported devices at load of the old app, and the band 7 is really new, so I HOPE they will add it soon – though I highly doubt it.

ADD I tried to bring my ancient aPple Iphone 6 back to life, and reset my old account and entered their Store where I found and installed the Huawei Hell. And it DOES support the Band 7.

I’m currently considering if the physical benefits of the Band 7 outweighs that the app handling it can hardly be installed on a phone I use as a daily driver, and I currently lean towards a NO. Had the officially available app supported the Band 7, (e.g. being an Iphone user), the Band 6 would already have been packed for a new owner….
For now hoping for the Band 7 being added with an update of the supported devices list… Or it is likely to be passed on to some in the fruit universe.