Huawei Watch Fit, is a name easily causing confusion as it is used for numerous different devices: The original (in two variants), and with postfixes “new”, “2” (in three variants) and “mini”. So they do not make it easy… 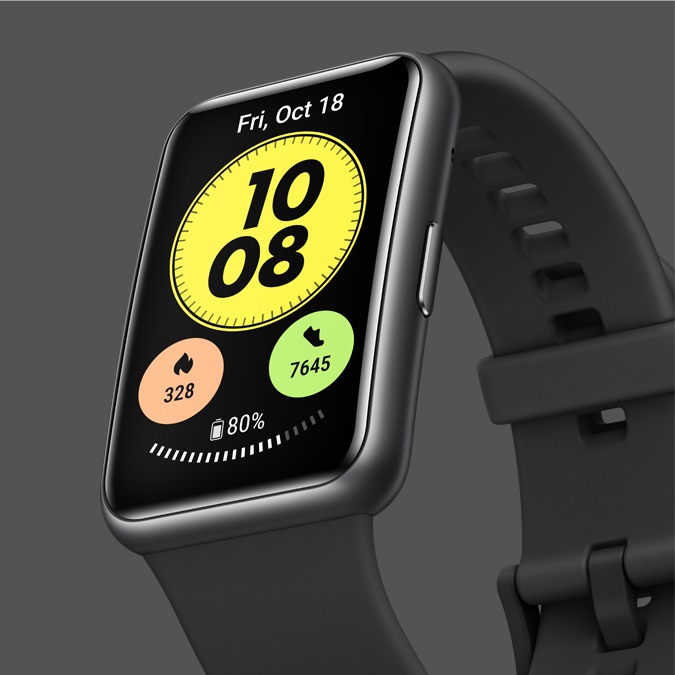 The original and the “new” are so close, that I have not been able to distinguish what the actual differences are!! The “new” only exists in one variant, the original also had an “Elegant edition”
The “new” got an extra sport mode, that was later added to the original by an update AFAIK.

The “2” is a wider and newer version, with less curved display.
The “mini” is a Huawei Band 7 in a slightly different case with a different band attachment, and with some camera remote, as far as I have been able to find out(!)

Here is the release history (approximately)

The original is functionally close to their band 6, with extra functions, some available on Band 7.

Rather than repeating these horribly long names I will call the Huawei Watch Fit New HWFN below, and the original HWFO.

Here are the relevant display sizes, transformed to measurements

The Band 7 is 44.35mm long, so similar bezels lengthwise as the HWFN

I would personally have preferred something like 2:3, with more rounded corners, so the band of the Band 7 could be reused. That is about a HWFO shrunken by 10% lengthwise. Here a quick mock-up compared to the Band7 and the HWFN: 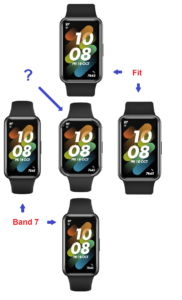 Note that the Huawei Healt App is no longer officially supported in the Android Market!! (Still supported on aPple’s Ios though).
The app was here: https://play.google.com/store/apps/details?id=com.huawei.health, until recently (less than a month), but has been taken down, v10.1.1.312 was the last available, and that was a really old version (2020-07-15), not even fully supporting the HWFO, HWFN, nor their Band 6 – (You need a newer version to activate the all day SpO2 – all else seems to work).
The app was still cerified 2022-10-29 according the web archive.
You can technically side-load a much newer version of the app directly from Huawei, but since many western governments shun Huawei, and ban them from their networks, it could not be considered wise to fetch it outside the officially Android Market security-wise. Obviously if you already took the risk and is using a Huawei phone, you are not less secure using their uncertified version of the app.

With the same screen size I would suggest looking at the Oppo Watch Free (OWF), that got an (even) better transition between band and display, making it even more wearable. (I compared the OWF to a Xiaomi Smart Band 7 Pro here a few days ago)

Here a collage from some Milanese-band vendors OWF to the left, HWFN to the right (My bands for both are still in the mail from China…) 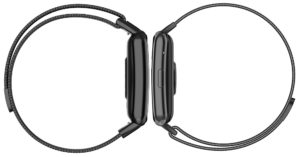 Since the band attachments go into the house on the HWFN, and are not hooked on some protrusion, you get better attachment on the HWFN. Though the bands for the OWF are slightly more flush with the display! But the difference in that aspect is marginal, none of them have the pill-box-on-a-string problems..

So despite the dubious support for Android, my personal preferences and usage patten tilted in favour of the HWFN.