The Sony RX100 III is the third of four in the RX100 series of chubby compacts with a 1″ sensor and a fast F1.8-F2.8 lens , and thus great lo-light abilities in a very compact though not easily pocketable unit.

I bought the RX100III even though a IV exists. The IV offers faster shutter and video, but not better lo light images it seems (perhaps even marginally worse), so not worth the extra price for my usage. In Denmark the price of the III is less than 60% of the IV for the time being!!! Currently I have taken about 4000 pictures, mainly at ill lit jazz concerts.

The first impression is that it is a very nice supplement for an ultrazoom compact (like TZ70 or HX90V), as it sort of offers what the ultrazooms does not. A much much more light sensitive sensor and lens – though of course with over 10x less zoom.

At 24 and 70mm equivalents at maximum aperture the amount of light reaching the sensor area is about 17 respectively 13 times higher than say a Panasonic TZ70 or Sony HX90(v).
It makes a HUGE difference for my usage. I was the ‘perfect compact’ camera for small jazz concerts into the night…

At over 4cm thick it is quite chubby (and heavy), but still it fits easier into the neoprene sleeve I use for the TZ70. As it is less in the other dimensions
It can even go into the sleeves I used for the F900exr and the CX5.  So easily ‘bagable’ but not so easily ‘pocketable’ in trousers.

This post is likely to evolve to a review over time, for now it is just some random bits and pieces.

+ The lo light abilities! The fast lens and and relatively large sensor (1″ type) does wonders!

+ Quite compact considering it is a 1″ type sensor.

+ Good hardware feeling, almost everything feels very well build. Especially the buttons fells like they are built to be used.

+ Help built into the firmware, including telling why something is not allowed currently. Though NOT telling what you need to do to make it possible(!)

+ Rather than a single one-function shortcut the fn-button enters into a quick-menu with 12 options you can select among 27 functions.

+ A lot of settings, that it might take a while to use optimally

+ The flash switch that at first looks like it could easily be inadvertently activated, actually has to be be moved quite a distance, so not very likely. See the Cons also.

+ Re-pressing the shutter during image preview cancels the preview.

+ It seems like there is a really good battery stamina for pictures without the usage of flash, After 800 shots it still shows the battery as ‘full’.

+ The camera can be used while cable-powered.

– The shutter button has a short ‘walk’, and there are no tactile feedback or ‘stop’ on the standard ‘halfway press’ to lock focus. So this is really hard to use. It is any undefined place between a slight touch and a click…. A bug like that should not exist in the third generation of a product…

– The hatch for the usb-plug that is the official way to charge the battery and transfer images, is not very good. It does not open fully but rely on the elasticity of the plastic to press against the plug. Even in hot weather, it is quite stiff, and it feels like it would not survive long. It actually makes it cumbersome to insert the plug!! (I ordered an external charger along with extra batteries before the camera, so will not pose me problems)

– Same issue with the hatch for the HDMI – though as this is likely to be used much less, this is less important.

– You have to manually extract and reinsert the eye-piece part of the viewfinder, this is a poor solution! It OUGHT to pop out after the viewfinder-unit pops up. And you can not just push it down again, this is also a two step (and two hands!) operation.

– When you move or delete images directly from the memory card, the camera gets confused, when it can not find the images afterwards. Poor software! This is especially bad as inserting the USB-plug is a thing that feels like it should be avoided at all costs(!!), and that it thus would be better to charge the battery externally, and transfer the images by the card. Anyway why infect a PC with some drivers, when so many PCs have a build in SDXC card reader….
ADD: WORKAROUND: Killing the folder \AVF_INFO on the card will make the camera build a new database when the card is reinserted, so if all images are imported/deleted this works fine. Any old images left on the card CAN be seen in playback, including all metadata, though not in the default view that relies on the database, but in the same view that also can display pictures from other cameras on the card.

– If you try to put it in a pocket without a protective sleeve, you have a high risk of breaking the flash, should the flash pop-up switch be activated, as the flash got ‘sharp’ edges and is very likely to get caught. So at the least use a £2 neoprene bag!

– It can not be seen in the Exif whether the ND-filter is applied or not(!). For comparable pictures of the same motive it can be seen by the exposure times that it matches 3 stops.

– It can not be seen in the Exif what mode is used, or if multiple exposures are used (handling backlit scenes or HDR)

– A tiny protrusion at the top right to grab the display at both sides when pulling it out would have been nice.

– While a new image is reviewing, the camera goes temporarily into playback mode, so controls (at the least most) can not be used to compose a new picture – I hope there is a setting somewhere to turn this silly behaviour off, otherwise the preview is likely to get the axe…….
ADD: WORKAROUND: Pressing the shutter slightly gets the control back.

– Shortest “Auto review” is 2 sec, I would have liked ½s or 1s as I primarily use it to glimpse at the composition and metering,

– Macro is somewhere between mediocre and poor.

– No time-lapse function included!
ADD: The greedy sods expects you to buy this basic functionality as an additional ‘app’ – though less than £10, it is the principle for a not exactly low end cheap compact. 😡 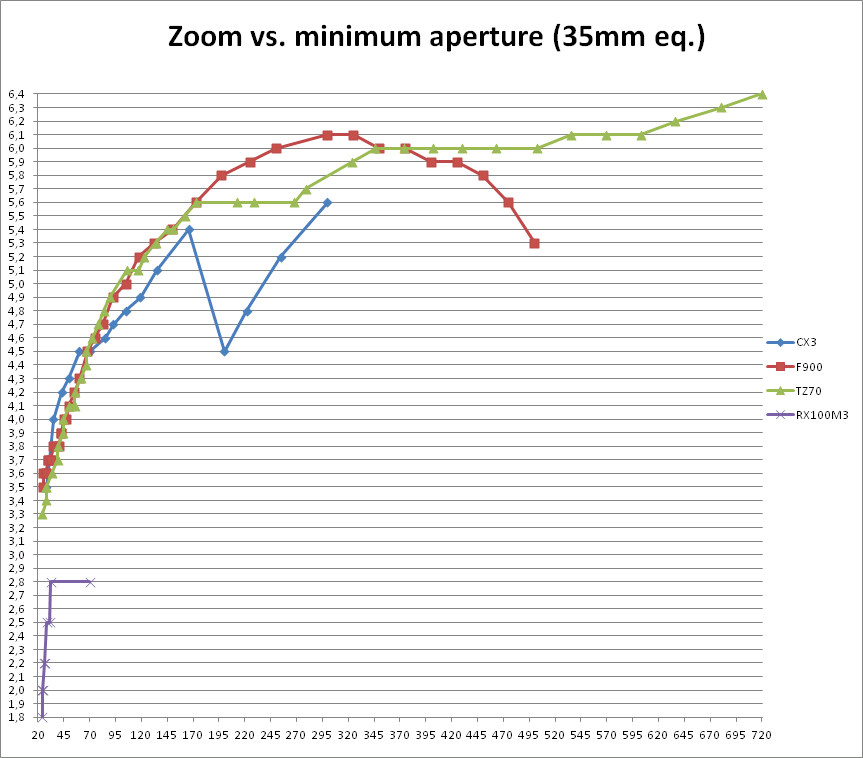 Many (including me) had hoped that the increased active area with the new stacked sensor of the RX100M4, would have given even better lo light abilities than the M3.
Unfortunately this is not so. At least in some situations it is even slightly worse.

Example from dpreview’s review of the M4 showing the difference to the M3 in poor light. 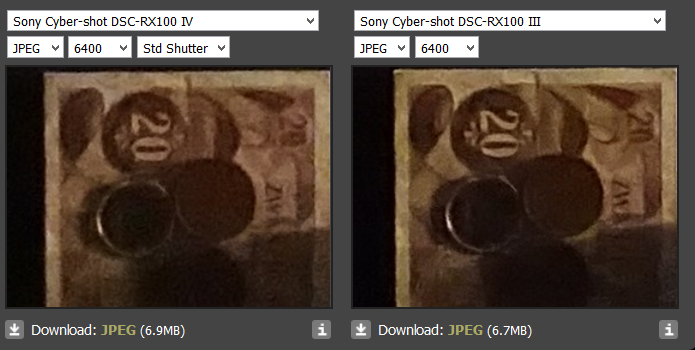 The same is seen when visually comparing JPG at other ISO values in poor light. (The visual compares of RAW is hard to do sensibly as the coloured noise makes it all look much worse to the eye than what the end result will be)

A test related to this thread http://www.dpreview.com/forums/post/56071012

Here are a couple of shots directly again the Sun, with and without ND filters, at different apertures.

I have some issues with my hosting provider on the maximum file size, so the below have been reduced by 2 x 2, and saved in plain MSPaint, so details are lost!

So you will NOT (currently?) get the real originals by clicking the images

And without the ND filter:

Especially at reduced apertures of F8 and F11 it looks almost like fireworks with the 28 coloured rays….

And here the worst example from yesterday evening through the trees, with both halo and purple blobs. 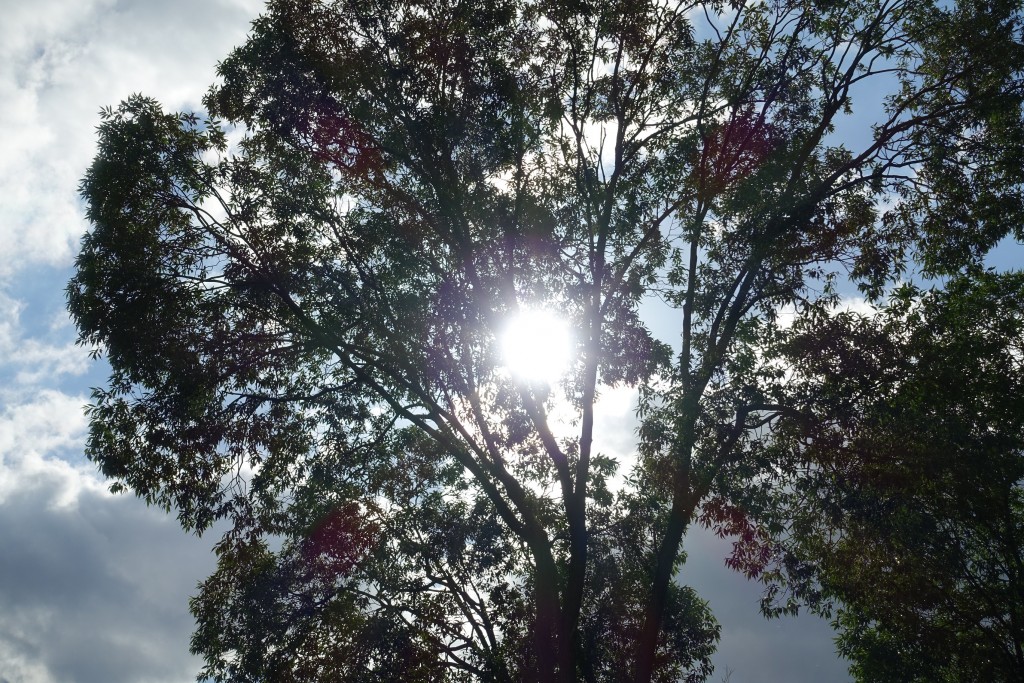 A compare with TZ70 in poor light

First the Sony at it’s default in P-mode. 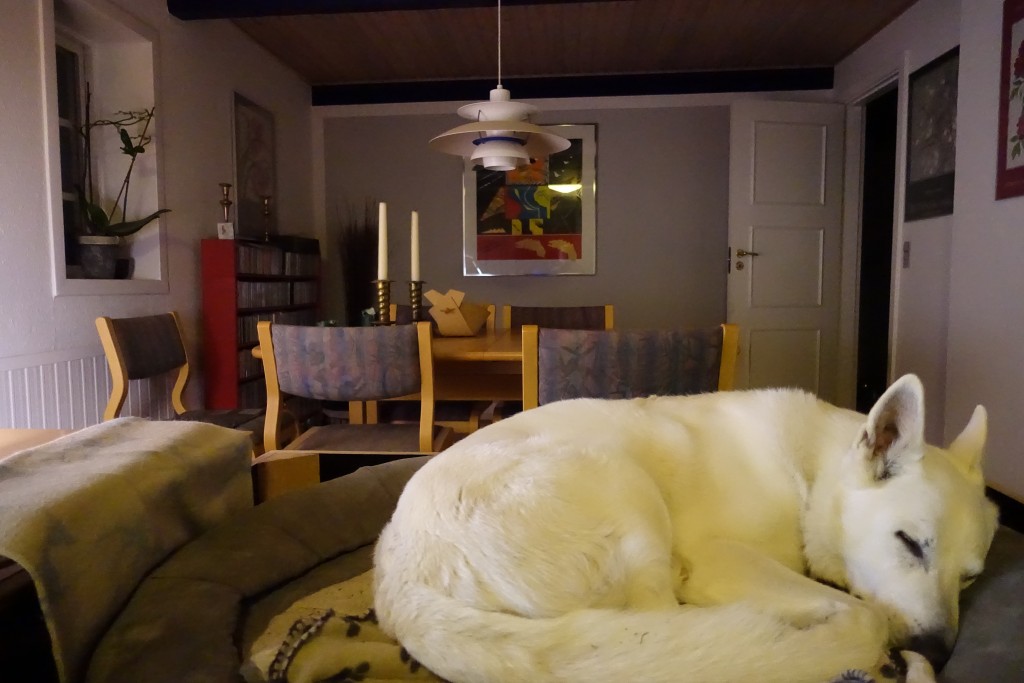 Next the TZ70, in manual, at same exposure time and ISO (highest offered), and with fastest aperture offered 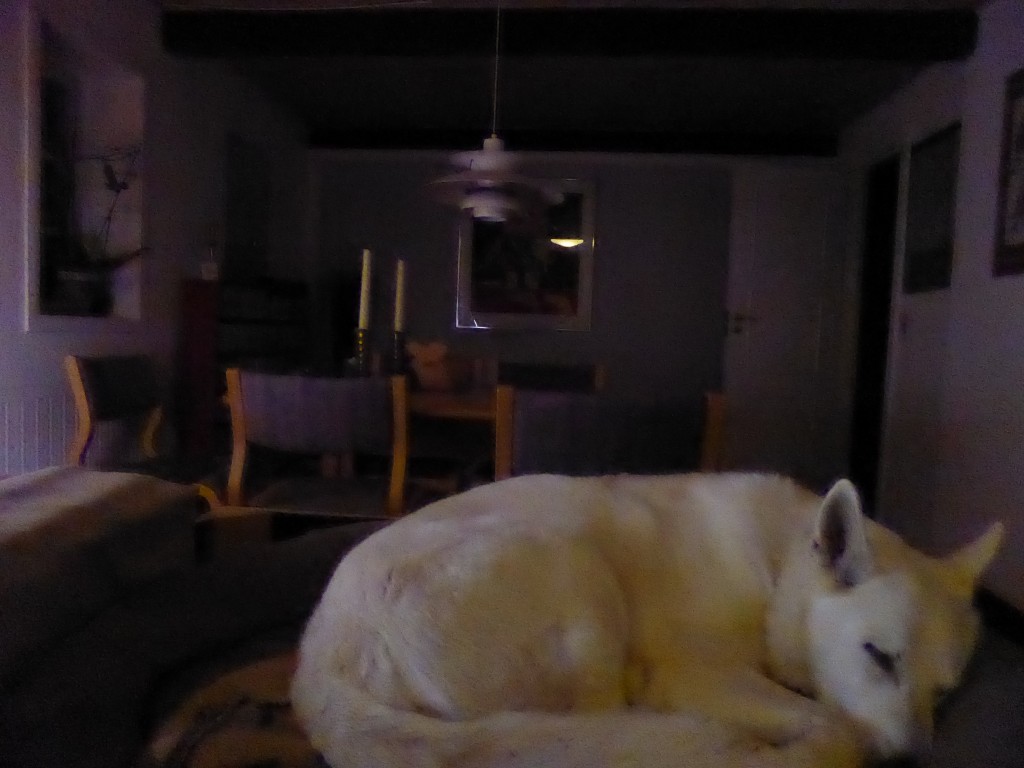 As can be seen it is simply in a different class, though the TZ70 is by no means poor in bad light for an ultrazoom compact.

(As the dog is sleeping [1:30AM] a slower shutter and lower iso would of course have made a smarter choice for both cameras with this motive – but that’s another story)

In short, don’t use this camera for macro… Except if you really need macro in poor light.

The least bad it can do is in full wide, with a motive about 9cm wide (about 1/60 mm per pixel). This is about what a mobile phone can do and very very far from what the Ricoh CX3-6 can do!

The AF does a good job on macro too, and you wont get closer macro by using MF (as you can on the Ricoh CX3-6) 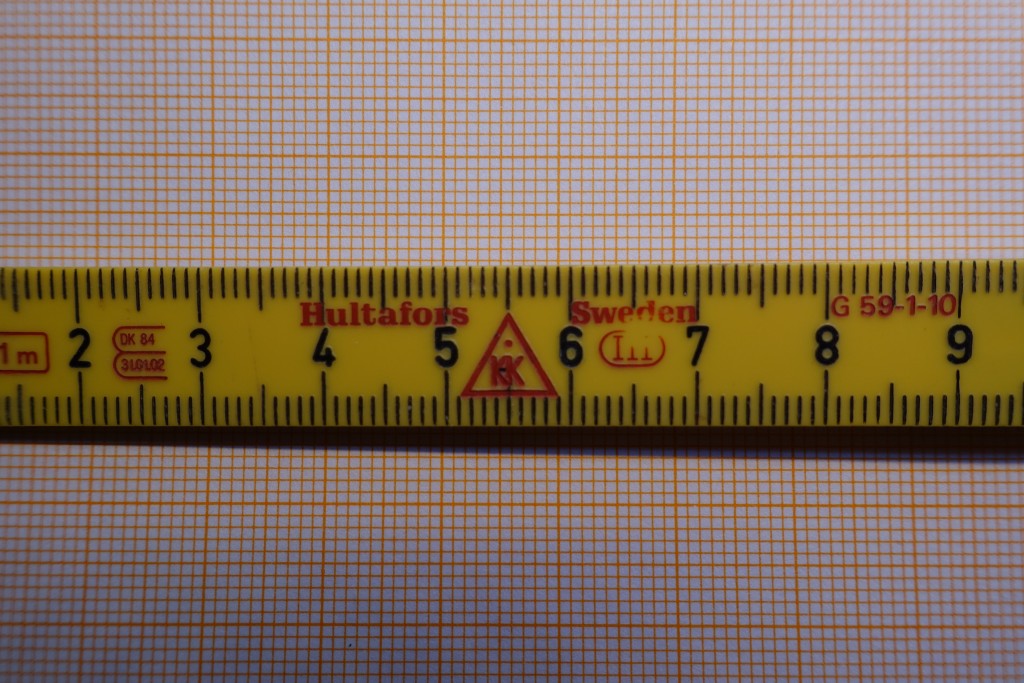 Note the slight pincushion of the vertical lines.